DEINE LAKAIENhave released the second single ‘Because of Because’ from their forthcoming double album Dual. 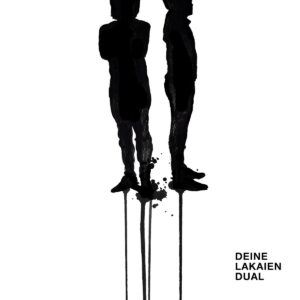 ‘Because of Because’ represents the duo’s lyrical “answer” to the previously released cover of Patti Smith/Bruce Spingsteen classic ‘Because the Night‘.

Alexander Veljanov explains: “While there is no musical connection between those two tracks, I have taken lyrical inspiration for ‘Because of Because’ from the themes that ‘Because the Night’ invokes. This song revolves around self-determination, a feeling of belonging, and the energy that can grow out of a joint resistance against a society that does not accept certain things that one’s own community takes for granted.”

Dual will be released on 16th April, 2021. Half of the double album consists of 10 new songs that DEINE LAKAIEN have crafted with particular artists or songs in mind that have been important for the duo’s musical evolution. These sources of inspiration are made clear on the second half of Dual, which features 10 amazing cover tracks that range from Cat Stevens’ classic ‘Lady D’Arbanville’ via Jacques Brels melancholic ‘La chanson des vieux amants’ to Kate Bush’s ‘Suspended in Gaffa’ and the surprising choice of the Linkin Park song ‘My December’.

You can pre-order Dual here.