Who says Death has to be disguised as a Grim Reaper? He might as well be the Grim Peeper or the Prim Reaper! According to Swedish artist behind Mortis Comoedia, Aurora Walderhaug, the Grim Reaper has various aliases. However, not all of them have to be somber and morbid. Melancholy is sometimes a choice and Aurora´s Reaper seems to put the whimsy back in melancholy. Whether he is wearing lingerie or high heels or seems to be peeking through unsuspecting ladies´ windows, he always does it with his usual dose of enticing humour! 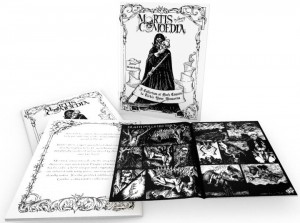 The comic series starts with an introduction from the author as she takes us on a ride back in time and tickles our fancies with her delightfully morbid sense of humour! The artwork speaks for itself and gives a realistic twist to the standard comic style. Miss Walderhaug is not only a brilliant artist but a vivid comedian aswell. She manages to merge the morbid with the comical in a sense that would not only appeal to the Gothically-inclined. Perhaps a bit too much on the macabre side for the younger comic fan(g)s, this series will serve its purpose to the mature audiences. 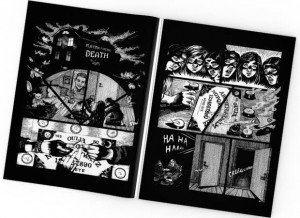 Miss Walderhaug crosses the borders of grave seriousness (pun intended yet again) and challenges death with a healthy dose of humour. Death is in no way a laughing matter but it is something we cannot ignore and I find she manages to put a smile on our faces despite the grim themes (one cannot escape the puns by no means).
If you do not mind having a chuckle or two on death´s expense, check out this awesome comic series done by a talented lady and support her delightfully morbid Grim Reaper as he tries to get back his bones from a mischievous pug. 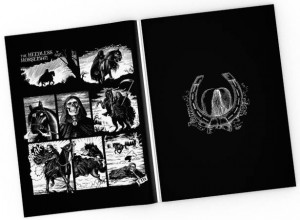 About the Author:
Aurora Walderhaug is a fabulously Gothic graphic artist best known for her signature Grim Reaper character. Mortis Comoedia is a collection of her wonderful strips featuring the hilarious antics of her very own version of Death. Captivating, witty, and laced with wonderful puns, word plays, and illustrations, Aurora’s strips are a real treat for anyone who enjoys the dark and has a slightly twisted sense of humour.
A native of Sweden, Aurora’s Reaper character has been channelled through her pencil in one form or another almost all her life – though it’s current, comic strip form, didn’t really take shape until early 2006.
The aesthetic style of the strips can be described as a marriage between the Scandinavian-produced, black and white version of The Phantom, from the 1980s, and old master engravings of centuries past.

You can get your copy from Amazon http://bit.ly/MortisComoedia