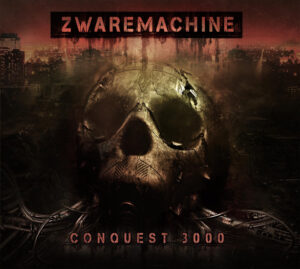 In 2018 Zwaremachine released BE A LIGHT,  which reviewers and fans embraced for the album’s nod to classic EBM and Electro-Industrial sounds. Combined with modern production techniques the band created their own Minimal Hypnotic Industrial Body Music.

A collaboration between Mach Fox and D.Corri resulted in the 5 song EP titled RIPPING AT THE FABRIC which was released in May 2020 by Brutal Resonance Records.

CONQUEST 3000 recordings feature the full live trio of Mach Fox (vocals/synth), Dbot (bass guitar/vocals) and Dein Offizier (drums) and the songs were written and produced in collaboration with Planktoon and D.Corri with additional mixing and mastering done by Jason Orris at The Terrarium in Minneapolis, Mn.USA. By working with other songwriters and producers on the new album Mach Fox was able to explore a wider range of styles while still keeping the signature Zwaremachine minimal hypnotic sound.