After the resounding success of their first-ever live performance at Austin’s South by Southwest Festival in March this year, Black Needle Noise have announced they will be playing three shows in the Los Angeles area this September. The band’s leader, legendary producer John Fryer, will be playing guitars for these shows, with Sean Haezebrouck joining him on drums, and Anjela Piccard and Betty X on vocals, as well as other guest vocalists.

Black Needle Noise’s second album, “Lost in Reflections”, will be available for presale on vinyl at these shows, with the official release date set for October 13th. This new album features many more guest vocalists, notably Bill Leeb of Front Line Assembly on “A shiver of Want”, electronic vocalist Kendra Frost on “Warning Sign”, and Zialand on “Treasured Lies”.

The tracklist for “Lost in Reflections” is as follows: 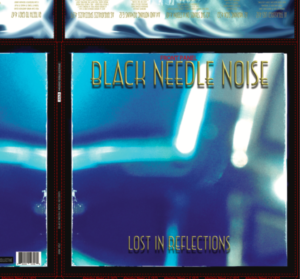 A SIDE
1. “Treasured Lies” vocals by Zialand
2. “Warning Sign” vocals by Kendra Frost
3. “She Stands On A Storm” vocals by Andrea Kerr
4. “And Nothing Remains” vocals by Ana Breton
5. “Breathless Speechless” vocals by Sivert Høyem

B SIDE
1. “Teeth To Grey” vocals by Omniflux
2. “This Kinda Road” vocals by Kendra Frost
3. “Swimming Through Dreams” vocals by Mimi Page
4. “Heaven” vocals by Jennie Vee
5. “A Shiver Of Want” vocals by Bill Leeb

To document their first-ever live performance in Austin, the band filmed a short “rockumentary” about the preparation for the show and the performance itself, offering a glimpse of what they have in store for their Los Angeles dates. Premiering via Torched Music, you can watch it here.