Fronted by the legendary producer John Fryer, Black Needle Noise have just released a new single, “I’ll Give You Shape”, featuring industrial icon Chris Connelly, well-known for his work with Ministry and Revolting Cocks, on vocals. The song is the newest addition to the series of singles that have been released by Black Needle Noise over the past few years. This unexpected collaboration is dark, dramatic and poetic all at once.

When asked about “I’ll Give You Shape”, here is what Connelly has to say: “I was so humbled to write and sing for this incredible music, my favorite thing about collaboration is that someone else’s sounds and melodies will push me into different atmospheres and moods, it’s like walking through someone else’s private home, it’s a privilege and I do not take it for granted as it can only ever strengthen me as a writer.” 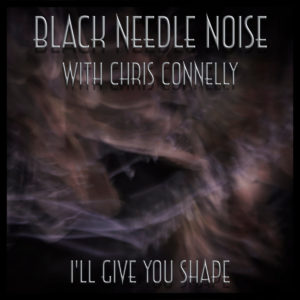 Meanwhile, Fryer seems to have enjoyed his collaboration with the industrial legend, having this to say about it: “It’s been a great pleasure working with Chris. I’ve been listening to his records for a very long time. Our friend Marija Buljeta put us in touch with each other thinking it would be a good idea if we collaborated on a song or two. As you can hear, she was right.” Indeed, it was Altvenger’s very own founder and editor-in-chief Marija Buljeta who helped make this collaboration happen by introducing both musicians to each other! The cover art for the single is her work as well.

This new song adds Connelly’s name to an ever-growing list of sometimes unexpected collaborators for Black Needle Noise’s music. When previously asked about his revolving door of vocalists, Fryer has stated that he “[likes] to keep people guessing” about what will be released next under the Black Needle Noise name.

Listen to “I’ll Give You Shape” on Bandcamp here: https://blackneedlenoise.bandcamp.com/track/ill-give-you-shape

This isn’t the only exciting news to come from Black Needle Noise, however; they have also announced their very first live performance at South by Southwest in Austin, TX on March 14th, at the Dirty Dog Bar. The lineup for this live performance will consist of Betty X on vocals, Anjela Piccard on backup vocals, John Fryer and Jonathan Lacey on guitars, and Sean Hazebrouck on drums. If you will be in the area and would like to go to this show, you can RVSP here: https://www.facebook.com/events/394911944590558/

Finally, some interesting news for vinyl lovers as well: the act’s 2016 album Before the Tears Came is now available on vinyl. The black variant can be ordered directly on Amazon here: https://www.amazon.com/Before-Tears-Black-Needle-Noise/dp/B07KM16S72/ref=tmm_vnl_swatch_0?_encoding=UTF8&qid=&sr=

If coloured records are your preference, inquiries for those should be sent to the following address: itourdj@gmail.com