Legendary producer and artist John Fryer has revealed the latest Black Needle Noise single. It is the first taste of the forthcoming album These Mortal Covers, which will be released later this year via Cleopatra Records. John and Anjela Piccard teamed up for the new single “She Talks To Angels”, a tribute 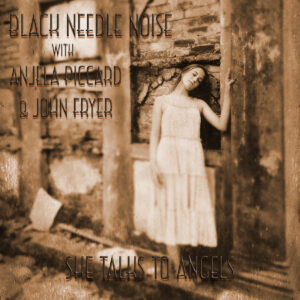 to The Black Crowes. John explains: “Always been a big fan of the Black Crowes and it always feels good to pay homage to bands you like. We wanted to give it a totally different and cinematic feel to the song in our version. Anjela’s vocals are very heartfelt in her interpretation and delivery of the lyrics and being inspired by the cities of New Orleans and LA, the City of Angels.”

“There are moments in this life that are both catastrophic and quite triumphant. The intention in recording this song is one of reflection and understanding. At some point, we all can find ourselves in total relation to the lyrics and the instrumental flow of the track. As for myself, the New Orleans / Los Ánjeles connection remains an anchor of the heart, as both cities represent a long-standing spiritual melange -unparalleled in beauty and gracious acceptance of its people” adds Anjela.

“She Talks To Angels” is out now, available digitally across online stores, such as Apple Music, and streaming platforms such as Spotify. It is also available directly from the artist via Bandcamp.

The CD edition of the Before The Tears Came LP can now be pre-ordered. This was the first album from Black Needle Noise, which had previously been issued only digitally and on vinyl. The CD has the full 11 tracks as per the digital release.

You can order Before The Tears Came CD HERE