Legendary producer and artist John Fryer and industrial music giant Raymond Watts (PIG) share the new video for “Seed of Evil”, which was released as a Black Needle Noise single in July 2019. With a perfect blend of Fryer’s intense production and Watts’ menacing, growling vocals, 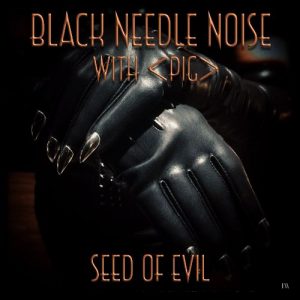 “Seed of Evil” is a dark track with equally sinister lyrics about letting evil overcome oneself. The video was conceived and edited by Fryer and Joseph Seuferling of Psionic Broadcast and filmed by Fryer and Anjela Piccard in LA and by PIG in London.

John explains: “Joseph Seuferling ﬁrst came to my attention when I saw he had a ﬁlm called ‘I Am God’ and BNN had not long just release a song with the same name. So I contacted Joseph and asked if he would like to meet next time he was in LA. Anjela & I went to meet with Joseph Seuferling at the Roosevelt Hotel and whilst we were talking, I asked him he would like to make a video for “Seed Of Evil”. He liked the song so agreed to make a video. So Raymond shot his footage in London and Joseph got to work.”

Although Joseph ran out of time to finish the video, John and Anjela shot their footage in LA, John got to editing and Joseph added some final touches.

‘Seed of Evil’ is available digitally across online stores, such as Apple Music, and streaming platforms such as Spotify. It is also available directly from the artist via Bandcamp.