VanGaalen comments that it’s“about the endless news feed. Giving in to your digital calendar, when all that’s on your to-do list is checking the online updates. Like a William Gibson waking nightmare, boring marketed as sexy.” 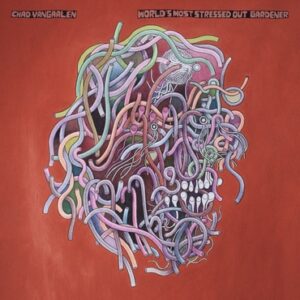 World’s Most Stressed Out Gardener was written, performed, recorded, and mixed by VanGaalen at his studio in Calgary, Alberta, and mastered by Ryan Morey in Montreal, Quebec. It is now available for preorder through Sub Pop. LPs purchased through megamart.subpop.com, Flemish Eye (Canada), select independent retailers in North America, in the U.K. and in Europe will receive the album on orange gold vinyl with blue/red trails (while supplies last). There is also a new T-shirt design available.

On April 8th, VanGaalen will perform a live stream from his Yoko Eno studio via NoonChorus. The show will be available for viewing in North America, Europe, Asia, and Australia at 7PM local time. Ticket holders will be able to stream the performance for 5 days following and will also be able to buy merch. You can purchase tickets for this event here.