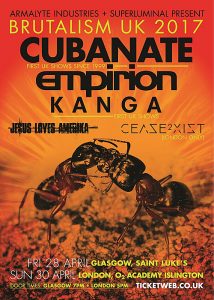 Cubanate’s brand new compilation album “Brutalism” will be released on 5 May. It covers the years 1992 to 1996 and features 14 songs from their first three albums, including remastered versions of singles such as ‘Oxyacetylene’, ‘Body Burn’ and ‘Joy’.