Renowned composer and director John Carpenter has announced his first album of non-soundtrack music in nearly five years, Lost Themes III: Alive After Death, which is set for a February 5th release on Sacred Bones. 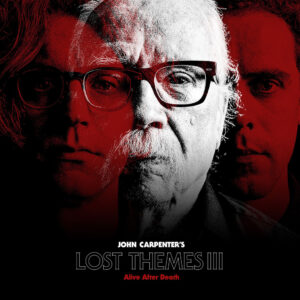 John Carpenter, Cody Carpenter and Daniel Davies have composed and performed as a trio since the first Lost Themes album in 2015: on studio albums, on soundtracks, and onstage. “We begin with a theme, a bass line, a pad, something that sounds good and will lead us to the next layer,” John says of the trio’s process. “We then just keep adding on from there. We understand each other’s strengths and weaknesses, how to communicate without words, and the process is easier now than it was in the beginning. We’ve matured.”

Following the release of Lost Themes II in 2016, the group went on their first-ever concert tour, performing material from the Lost Themes albums, as well as music from Carpenter’s classic film scores. They re-recorded many of those classic movie themes for 2017’s ‘Anthology’ album. The following year, John was asked to executive produce and compose the music for the new Halloween movie directed by David Gordon Green.