Mortiis will release a Free download single on January 23rd. The single is remixed by Die Krupps and it will also feature a non-album remix by Leæther Strip.

The band will tour UK this March with PIG aka industrial pioneer Raymond Watts. The tour starts at Nottingham’s Rescue Rooms on 10th March and finishes at London’s legendary Garage venue on 18th March. 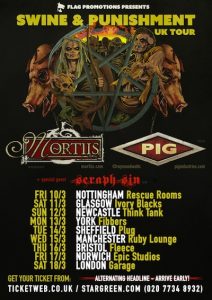 Tickets are on sale now at:

Newcastle Show tickets are on sale at: