MORTIIS is set to release the new album “Spirit Of Rebellion”, a re-interpreted 2 track long expansion and continuation of the 1994 Era I classic “Ånden som Gjorde Opprør” which will be released on 24th January 2020 via Omnipresence Production / Dead Seed Productions. 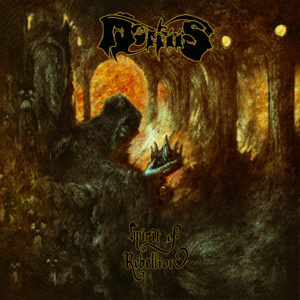 He comments:
“I had to fend off a lot of demons to get to this point. They’ll be back, they always come back, but at least my vision is no longer clouded…When I was working on re-interpreting my old music for the Cold Meat Industry Festival in Stockholm almost two years ago, I had no idea that I´d eventually create an (almost) new record, nor that a section of it would be used for my first Dungeon Synth video since 1996. But here we are.”

“Spirit Of Rebellion” will be released on CD, Vinyl and in digital format. Pre-orders are available now.

MORTIIS, has also revealed the cover artwork for this forthcoming album. It was created by French visual artist & fantasy illustrator David Thiérrée (https://www.davidthierree.com) who is also known for his work with bands like Behemoth, Primordial, Wolves In The Throne Room.

Watch the video clip for “Visions of an Ancient Future” which gives a first taste of things to come for the re-interpreted music of ”Spirit Of Rebellion”: https://youtu.be/j-RCM61Sb5s