Mortiis, the Norwegian visionary behind the dungeon synth genre, has just launched a new video for his song “Visions of an Ancient Future”, from his upcoming album “Spirit of Rebellion”. The video is directed and produced by Finnish director Ari Savonen, best known for his work on the movies “Törkypukki vol. 2” (2016) and “Backwood Madness” (2019) as well as the video short “Takapihan Pojat: Joulutarina” (2011).

Here is what Mortiis has to say about the new video and his upcoming album:

“I had to fend off a lot of demons to get to this point. They’ll be back, they always come back, but at least my vision is no longer clouded…When I was working on re-interpreting my old music for the Cold Meat Industry festival in Stockholm a little over a year ago, I had no idea that I’d eventually create an (almost) new record, nor that a section of it would be used for my first Dungeon Synth video since 1996. But here we are. New video and (almost) new music, and my first Era 1 US tour since 1999”.

Mortiis also recently announced he is returning to North America and embarking on a 10-date tour this spring, starting March 28th. He is celebrating this tour with quite the unique gift for his fans: for a limited time only, 24 of his musical releases (both from Mortiis and from other related projects) are available as free downloads on Bandcamp!

Watch the video for “Visions of an Ancient Future” here: https://youtu.be/j-RCM61Sb5s

Don’t forget to get your free music downloads here while you can: https://downloadmusic.mortiis.com/

Here are the ten dates of the upcoming North American tour: 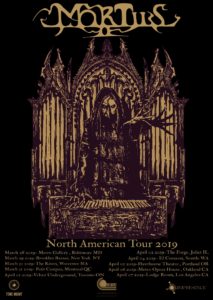