Following her debut single “All My Love“ taken from her upcoming debut EP Dogs and Gods, London-based singer & songwriter October and the Eyes shares her new single & video “Playing God“.

Speaking about the new single, October explained “‘Playing God’ is about the innate human desire for power and control but also our ability to cry “poor little ole’ me” when it all gets too much.” 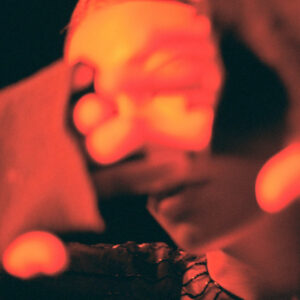 “It’s also hugely laced with irony, humour and contradictions – I’ll be the first to admit my lust for control, yet I’m also ready to laugh at myself (at my own expense) at how farcical our trivial desires for such things seem in the grand scheme of life. It seems I’m constantly battling between bolstering my ever fragile ego and humbling myself by how embarrassed I am by my own existence. I am a constant contradiction – I think all humans are.”

On the visuals behind the new track, October added “The video references my favourite cinema of transgression videographer Richard Kern’s ‘Submit To Me Now’ film. To me the title and video of his film both represent the inherent sexual power that the female body and mind possess – our ability to ‘play god’ at our own choosing. Also it’s just a sick video visually and Lung Leg looks badass and I can only hope to be half as rad as her one day.”

Despite only being 23, the New Zealand born musician October has been involved in musical pursuits since she was a child. October describes her musical style as ‘collage-rock’. Pulling musical inspiration from the likes of Bauhaus, Bowie, Siouxsie Sioux and Suicide, with nods to acid rock, psychobilly and post-punk, she then squeezes her influences through the gauze of modernity and electronics, thus creating something entirely of her own.

Thematically the Dogs and Gods EP explores the complex dynamics of love, lust and infidelity in the 21st century.

Dogs and Gods is  due on 20 November via KRO Records. You can pre-order the EP  here.