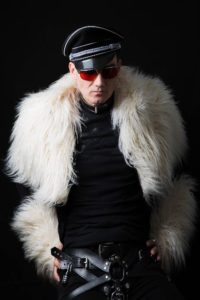 Decrying the meltdown of morality and the rise of mobocracy, equally biting and politically on-point as we’ve come to expect from industrial legends PIG, their new song “Mobocracy” brings back their sharp industrial edge we all know and love after their experiment in sound with their covers album “Candy”.

The song is featured on the Mobocracy EP, only available on the band’s upcoming North American tour, continuing PIG’s tradition of gifting their dedicated fans exclusive tracks as part of their VIP tour package. If exclusive songs aren’t enough, each copy comes with hand-drawn artwork from the hand of Raymond Watts himself, making each copy a unique keepsake all its own. “Each CD comes with hand-drawn artwork that I designed to bring the TLC with which it was conceived, written, recorded and delivered straight into the hands of the eventual owner,” he explains. “Once that umbilical cord is cut and it becomes yours, you can do with it what you wish…” The EP is just one of many items included in the VIP package. If you’re headed to one of the band’s shows, make sure you remember to buy your VIP package from PIG INDUSTRIES before you head out!

The accompanying video, also serving as a lyric video featuring Watts’ artistic and at times surreal handwriting on screen, comes from the mind of video artist Kill Switch Auto. Watts had this to say about the video: “Bryan from Black Asteroid introduced me to Kill Switch Auto, who directed and treated the video. When I saw his work, I knew his brutal and gritty visual aesthetic would be a perfect match for the song and its subject matter.” 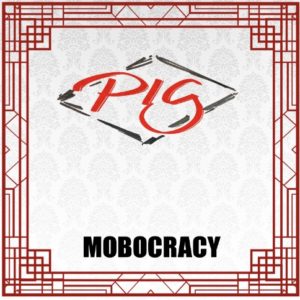 The Mobocracy EP also features a second original track, “Divine Descent”, and two remixes: one for “Confession” from the hogtag-exclusive Wages of Sin EP, and another for “Ecstasy & Exorcism”, whose original version is featured on PIG’s 2018 album Risen.

PIG’s Divine Descent Tour kicks off this September 19th in Toronto and continues until October 6th, featuring an onslaught of east coast dates and a stop at Chicago’s one and only Cold Waves Festival. Steve White and En Esch, who fought the industrial wars alongside Watts as part of KMFDM and previous iterations of PIG’s live band, will be joining him once more, as well as Galen Waling, who last toured with PIG during 2017’s Prey & Obey Tour.

While you wait for this long-awaited tour to come rock your city, watch the video for “Mobocracy” right here. 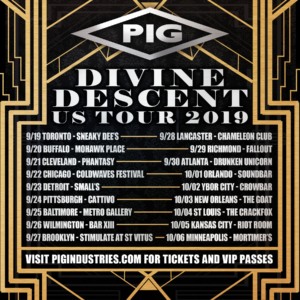