LA based dream pop trio Tashaki Miyaki have just released a single and video of the title song from their forthcoming second album, Castaway, which will be released on 23rd April via Metropolis Records. 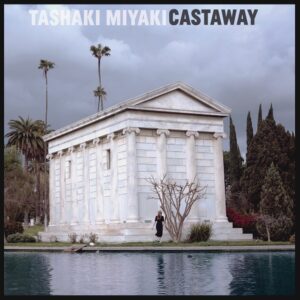 Singer, drummer and producer Paige Stark states that the song “is about the challenges of romantic love and how we are all bad at it in one way or another. The idea of a castaway in all this is that no one understands the relationship except the people in it, so you really are stuck on an island alone together there. Maybe you make it back to the mainland, or maybe you stay on the island.” About the video she adds: “I wanted to tap into all the feelings that can come up in love relationships: anger, sadness, loneliness, vulnerability, stillness, joy, romance, longing. The actress in it has a beautifully expressive face and I’ve known her for a long time. I knew we would be able to create those moments together. I wanted it to feel like the camera was her lover, capturing her in various private moments, moods and feelings.” Stark also explains the album: “The album title comes from this thing a friend would say, calling himself a ‘castaway from decent society’. I also feel like a castaway a lot of the time. When I wrote the title track, I was thinking about love and how it changes over time if you stay in something long enough. It gets hard. And sometimes you feel stuck. It’s a pretty melancholy record, I guess. I always try to be direct, but I didn’t have as much life lived on the first record. I saw things very black and white, and perhaps simpler. Now I see a lot more grey and a lot more complexity.”