The Birthday Massacre are releasing their new album Diamonds on Metropolis Record on 27 March 2020. Diamonds explores themes ranging from heartbreak to anguish and from lust to love. 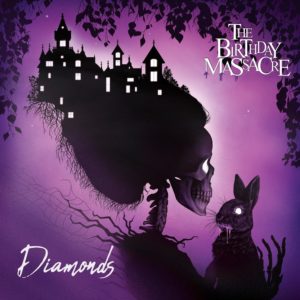 “Diamonds is a current reflection of where Falcore, Chibi and I are at creatively,” states guitarist Rainbow. “For my part, I think the lyrics are quite contemplative and philosophical. Underneath the surreal metaphors and imagery are some very raw and personal sentiments. Throughout the writing process we had the opportunity to collaborate with some of our closest and dearest friends. We did some writing sessions in L.A. with Amir Derakh and RyanShuck from the band Julien-K. We also worked with Brett Carruthers from the band A Primitive Evolution for much of the recording process. Kevin James Maher of Fake Shark also contributed some melodies and inspiration. And former member O.E. returned to contribute vocal melodies and lyrics throughout the record.”

The Birthday Massacre are excited to get back on the road. Falcore says: “Beginning on March 27th, we kick off a US tour that will take us around the country in 35 days. Many of the shows are already showing signs of selling out and extra shows have been added in New York City for May.” “We headline the Amphi Festival in Germany in July,” continues Falcore. “We are anxious to get back to our European fans and so a full tour of European major capitals is planned for October, just after we return from South America. Add Russia to the front of the European tour and the UK to the back and that will take us into November.”