20 years ago, influential goth-electro-industrial-cyberpunk band The Cassandra Complex released ​Wetware​. Now it is finally being made available again in fully remastered and resequenced versions, spread over three releases.

The songs were originally written in 1999 in Los Angeles and Hamburg, and were seen by the band as the culmination of the work they had been doing in the previous 15 years of near-constant recording and touring.

“From the moment I started The Cassandra Complex we had basically never stopped working on music -when we weren’t touring we were in our studio in Hamburg doing production and remix work for other European alternative bands. I literally lived in our studio. We had gotten fairly burnt out by that stage 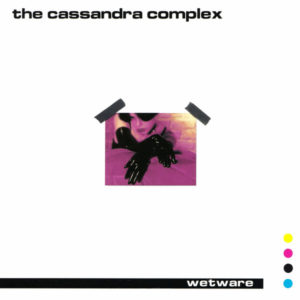 which left us wondering where to go next. Getting out to LA forced me to look at our past from a new perspective. I started listening to our older records in order to rediscover what had made them so good in the first place. I had also been doing some work with Kraftwerk, which got me involved with their interest in the Man Machine interface. I realised that was something also intrinsic to what we were doing with The Cassandra Complex – the synergy between very rigorous and computerised rhythms and human improvisation and emotion. That got me thinking about computer systems, where you have Hardware, which is the chips in the machine; Software, which is the information running on it; and Wetware, which is the biological operator controlling and directing the whole thing i.e. us. That became the working basis and title for what we wanted to do next.” says the band’s lead singer and producer Rodney Orpheus.

For this new version, not only has the recording been fully remastered, it’s now being presented in three linked releases. First up is the 3 track​ Twice As Good​ EP on November22, featuring legendary electronic acts Front 242 and Apoptygma Berzerk, who were now both called in to do remixes. December will see the release of the other songs from ​Wetware ​split into two parts: ​Hardware ​and Software​.

Rodney explains: “When we were originally working on ​Wetware ​we ended up writing so many great songs that we couldn’t fit them all into one 70 minute CD, so we had to leave some songs off. When it came time to remaster it for streaming I realised that I could now add in the missing stuff, and split the whole thing into two albums instead. So now ​Hardware ​contains the harder, faster, more in-your-face songs, while ​Software ​contains the longer, slower, more psychedelic pieces. Listening to each one individually is a much more coherent experience – it’s the two halves that make up the totality of The Cassandra Complex.”