Belfast’s alternative rock act Wynona Bleach formed in 2015 under their previous name of R51, where they self-released critically acclaimed EP’s “Pillow Talk” and “NO CHILL” and embarked on a 12 date Russian tour. Since changing their name in 2018, they released the EP “Sugar” and made a number of live session appearances on BBC Radio. They performed at the Reading and Leeds Festival, a televised Ulster Hall show in Belfast. They were personally invited to support Alice In Chains for two sold-out 1600 capacity venues this past May. 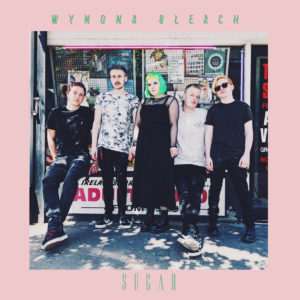 Wynona Bleach declared their arrival in late 2018 with the release of their debut EP, Sugar, and lead single, “Eyes Burning”.  “The guitars rise up lik fuzz-mountains and the melodies are strangely sweet.  It’s a rich combination and the critic who invented the term ‘gaze-pop’ may be onto something” says the legendary Stuart Bailie.

With glorious indie rock tunes reminiscent of acts such as The Smashing Pumpkins, Curve, The Joy Formidable and Wolf Alice, their biggest year is about to drop in 2020 with the release of their debut album produced by Bill Ryder-Jones.