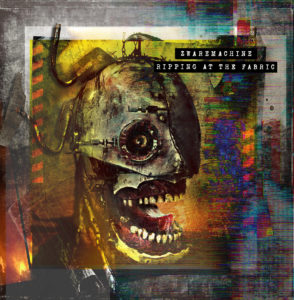 New Zwaremachine’s EP Ripping At The Fabric is telling the tale of a hero and what he becomes. The five track EP was written by founder Mach Fox and Darren Corri. They wanted to create a sound that would evolve Zwaremachine’s style but maintain the band’s signature tone. The new EP also dug up two old demos ‘New Design’ and ‘What We Are’ and transformed them into fully mixed and mastered songs. Mach Fox has described the EP as having a sound that could have easily come before the 2018 ‘Be a Light’ album. He notes the influence of The Prodigy and their use of sampling with bass lines and aggression from Nitzer Ebb and Wax Trax! era genre blending.

The EP will be out on May 20th on Brutal Resonance Records. It will be available as a limited edition EP on cassette and as digital download.

The amazing artwork was done by Mark Gerrard.