It’s been 3 years since we last saw A-ha in London at O2, and we were really happy we’d get to see them in a smaller venue this year – Brighton Centre in Brighton. Though the venue had a seating plan, we didn’t assume people would be sitting, as I don’t really think anyone could enjoy A-ha live without moving. They had prepared two sets for this occasion; Hunting High And Low for the first set, and a selection of various hits for the second one. 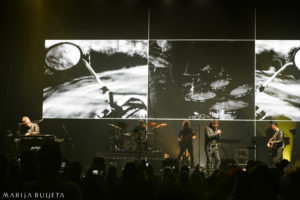 The venue was already packed by the time they appeared on stage. The recognizable pencil sketch animation taken from their “Train Of Thought” video was played on the huge display as the sounds of the intro announced the start of the A-ha spectacle. After the first few minutes, the suspense was so great that when the band finally appeared on stage, the crowd’s loud cheering was almost deafening. The trio was accompanied by a drummer, a bass player and an additional keyboardist. The first beats of “Take On Me” got everyone on their feet, as expected; who could resist a song so powerful that it stood the test of time and remains one of the greatest hits in pop music to this day? Despite being written so long ago, it is probably the best synth-pop song to this day, and I genuinely doubt that anyone could miss seeing the famous video, whether you grew up on it or you’re just a music fan. The song and the video became a part of pop culture and it is a true privilege to hear it live. 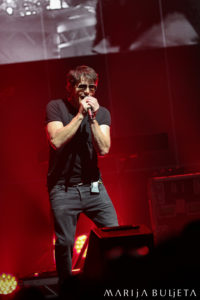 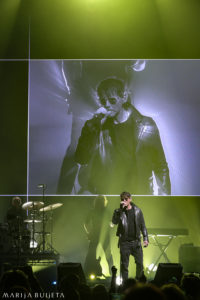 The songs from the album were performed in the running order. After “Train Of Thought”, another dance floor number, it was time for the utterly emotional “Hunting High And Low”, which brought many of us to tears. That was a truly spectacular moment. Morten’s performance was exceptionally touching; he was communicating with every single person in the crowd, not only with his voice but with gestures and moving expressions as well. There was an unexpected pause, after which Morten encouraged the audience to join him; this made us feel like we were really part of this undoubtedly special moment and this magnificent evening with A-ha. “Living A Boy’s Adventure Tale” is one of my favourite songs on the album and I really loved hearing Harket’s brilliant vocal performance and what is probably the best falsetto in pop music. Equally striking was the performance of “The Sun Always Shines On TV”, one of A-ha’s greatest hits. The songs had accompanying video animations and we could see mannequins which reminded us of those in the video. It was a 1985 throwback evening, after all. Although the songs are almost 35 years old, they still sounded so fresh and vibrant; they could have been easily written today. A-ha’s exceptional songwriting yielded so many astonishing hits that can never really go out of fashion. 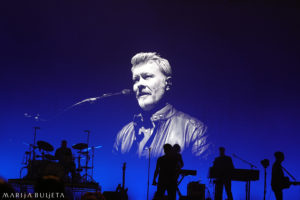 Magne was a showman on this occasion again. His wit and charm were infectious and heart-warming; he was talking to us from time to time and made the crowd feel more included in the show. He introduced us to a different but still recognisable version of “I Dream Myself Alive”, and the audience loved it. They closed the first set with “Here I Stand And Face The Rain”, which again showcased Morten’s stunning emotional performance and vocal capacity.

The first set was rewarded with loud applause and cheering, but we knew more hits would follow after a 20 minute break. 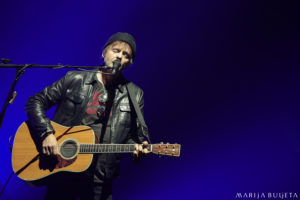 A-ha started the second set with “Analogue (All I Want)” from their 2005 album Analogue. It was a pleasant change in their repertoire and a fast-forward into their more recent work. Equally refreshing was “Foot Of The Mountain” from the 2009 album of the same title, which received amazing feedback; a wonderfully catchy chorus invited everyone to sing along. They decided to revisit their 80s material with the upbeat “The Swing Of Things” from their album Scoundrel Days. Afterwards, they slowed things down with one of the most beautiful covers, “Crying In The Rain”, which most people identify with A-ha rather than the original version by The Everly Brothers. We were then rewarded with another East Of The Sun, West Of The Moon song, and their choice was a very dramatic and rock number “Sycamore Leaves”. By that time I stopped counting how many times Paul changed his guitar; I couldn’t decide if I liked the acoustic or the electric more, he was brilliant on both. 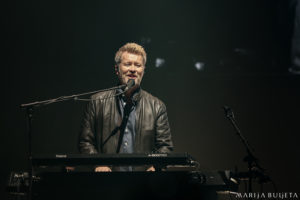 Magne took the role of the show presenter once again and announced the new song “Digital River” which we were about to hear for the first time. He kindly invited us to use our phones instead of lighters to show extra support for this one; they were really confident about the song and we welcomed it with loud cheering and applause. Another Scoundrel Days song was on the menu: “I’ve Been Losing You”. It’s difficult for me to choose my favourite A-ha song, but this one is definitely in my top 10; apart from the wonderful melody, the lyrics are utterly emotional, intense and profound. Before the last song, Magne introduced the support band and thanked the frenzied crowd. The last one they played was “Stay On These Roads”, a beautiful slow-dancer, which brought us back to the 80s. Morten was again flawless, even though the problems with his ear mic persisted throughout the show. The crowd was supporting the band and Morten by singing out loud; no one really wanted it to end. 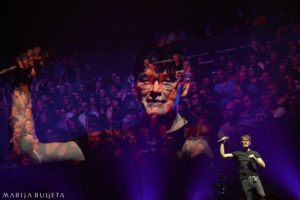 The band parted with us, but not for long. They soon returned to their loving fans with two additional songs. To everyone’s delight, they played “Scoundrel Days” and “Living Daylights”. I couldn’t possibly imagine a better finale in James Bond’s land than actually playing their Bond theme song, which was received with great enthusiasm; the crowd took over and Morten could finally rest as thousand voices sang as one. Magne encouraged us to sing even louder and made a little competition between the left and the right side of the venue, but in our hearts, we were united in the everlasting love for this great and one of a kind band. We hope there are many more shows before us, as well as a few amazing releases. Thank you A-ha for decades of brilliant and outstanding music!