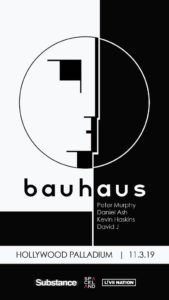 Bauhaus will reunite for the first time in over a decade for a Los Angeles show.

The band consisting of Peter Murphy, Daniel Ash, Kevin Haskins, and David J will reunite on 3 November at the Hollywood Palladium.

You can buy tickets here .