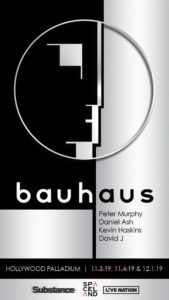 Bauhaus will reunite for the first time in over a decade for three Los Angeles shows. After two sold out shows on 3rh and 4th November, the band announces the third Los Angeles show on 1st December.

The band consisting of Peter Murphy, Daniel Ash, Kevin Haskins, and David J have reformed a few times since braking up in 1983; in 1998 and then again from 2005 to 2008. They released the LP Go Away White in 2008, the first in 25 years, but broke up before they could tour in support of it.

You can buy tickets here.