Now that the Christmas and New Year’s holidays are over, it is time to reflect upon one of the coolest festivals in Europe, BimFest. Although BimFest has a long tradition, we have visited this Belgian festival for the first time in 2016. It has been two weeks now that I’m writing this text, but the impressions have not faded. We still feel as if it was yesterday.

There were several performances that we were strongly interested in. First, the two acts that we really wanted to see were Dive/Dirk Ivens on Friday and A Split-Second on Saturday. Secondly, we were curious about Underviewer, a side project of De Meyer and Codenys and a;GRUMH… who had announced a one/off show. Finally, we were also very pleased that we would see Signal Aout ’42 again and find out what kind of show Suicide Commando would put out in their homeland. 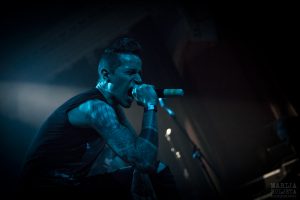 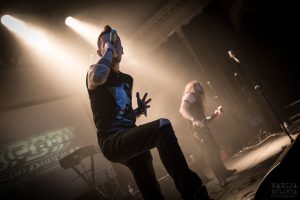 The journey was pleasant and our B&B excellent. As soon as we arrived, we got ready and headed to the venue. We were told that this time BimFest was held in the new venue, De Casino. We arrived in time for the first act, Super Dragon Punch!!. I went straight to the stage to take some pics. Although there was no photo pit, it was not yet too crowded and the atmosphere was relaxed, just warming up for the time being. The band gave an excellent show. We didn’t know what exactly to expect from this fairly new band, but their performance was brilliant and the frontman really knew how to animate the crowd. Not knowing the songs can be a drawback, but sometimes it is nice to hear something new that would prompt you to check on the band later. This industrial-ebm-synth pop act certainly managed to catch our interest, so we will pay attention to them in future. They certainly gave us some positive energy. 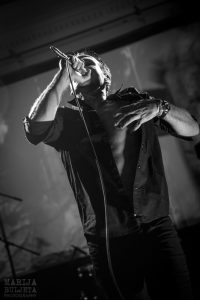 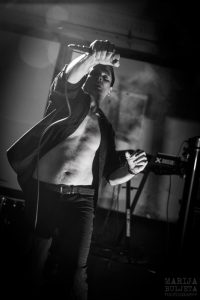 There was just a little time until the next act came onto the stage. The organisation seemed flawless, the stage changes being carried out swiftly. The time flew, Dirk Ivens was on. This was the first time that we saw him playing in Belgium in front of his home crowd. Well, not necessarily, since, as we have learnt later, the audience was not all Belgian: there were many visitors from Germany, Sweden and UK at this very peculiar festival. It is always a special pleasure to see Dirk Ivens in action. This time one–man–show again. The energy he transmits to the audience is punching and overwhelming. Being so long on the scene, Dirk definitively knows how to animate and you can feel that the man is a work of art. Dive repertoire pleased his fans and anyone who cares for the original and unique musical expression. Dirk doesn’t need much. The dim stage, some strobes and basic projections, that’s all he needs to complement his very physical performance. Try to catch him on camera. Yet, the pics you can get from his live shows look almost like his art. Anyway, I can hardly remember his whole setlist, but I remember that Sidewalk Sinner was the second song he played, at some point there were Final Report, Lost Inside You, Blood Money, and his cover of Joy Division’s Isolation. The closing song was Snakedressed. 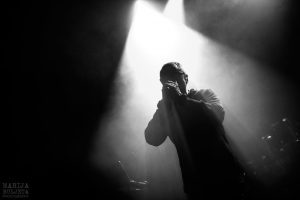 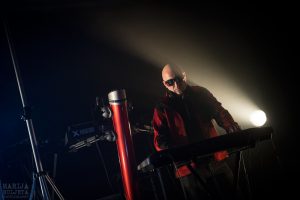 Being Front 242 fans, we are ashamed that we have become aware of their side project Underviewer just before BimFest. The guys released their Wonders & Monsters album in 2016 and I was looking forward to hearing how it sounds. I was really optimistic about the sound, since their performance was rather static. The songs were not what I would expected from Front 242 crew, but I quite liked the material they presented. However, my husband prefers Front 242; he is not the only one and they played Kampfbereit for those like him. By the end of the show Richard Jonckheere appeared on stage to help De Meyer with vocals. 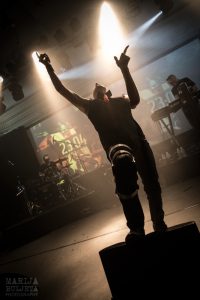 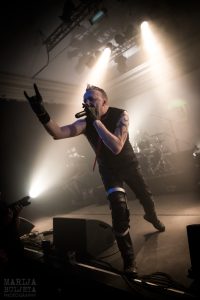 The night was coming to its end too soon, but we found a moment or two to chat with some friends and acquaintances. Between the sets of Underviewer and Suicide Commando I got some free time to finally briefly catch up with Dirk before I had to make my way to the front row for Suicide Commando. Unfortunately, I was unable to get the best position for taking pictures. I enjoyed the show non the less. Johan is always excellent on stage and he is probably one of the best live performers in the genre. His stage presence makes a great impact and he is a great communicator with the audience. We didn’t make it until the very end of the show. We drove five hours that day and we were really too tired, so we took a walk around the venue, checked the merch stands, talked to some friends, and headed back to our B&B. First day mission accomplished. 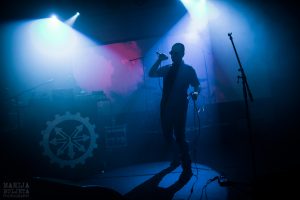 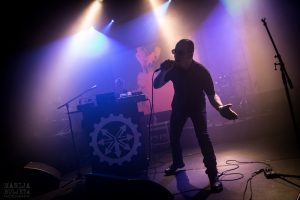 The second day started pretty early. We were at the venue already at 3 PM. The first on stage were Euforic Existence. And it was euphoric indeed. An EBM act without compromise, the frontman with the relentless attitude. Thumbs up for this project. It is really worth checking. 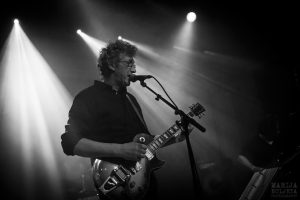 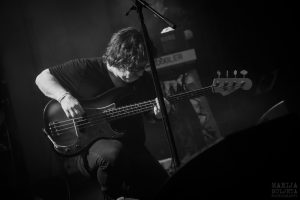 The atmosphere changed quickly with the next band, Struggler. I had thought that this was going to be an all electronic or mostly electronic festival experience. But when this band came out, my expectations changed. And I really liked what I heard. Pure alternative guitar and bass driven performance. They sounded somewhat close to Pixies or PIL, but again nothing like it… and they performed really well. I must say I was really impressed by the bass player. I would like to check the guys more, but it was however not my husband’s cup of tea; he was hoping to hear more synths and less guitars. 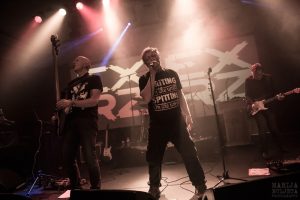 His patience was put on test again because the next band to perform were EX-RZ, alternative, punkish guitar based band that is, I suppose, well known to Belgians, but not to us. So, we saw them for the first time and again we heard a show of great quality. 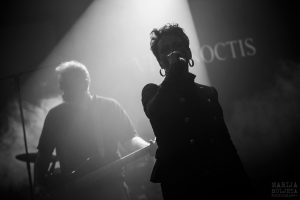 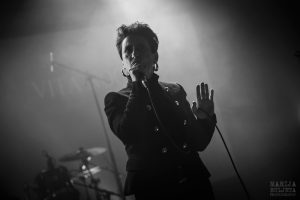 Next one were Vita Noctis. I really enjoyed this duo. It was a refreshing change to hear at last the first female lead singer at the festival and it also took us back to the synth sound. The band has been around since the 80s and the vibe was unmistakeably there. It seemed that their repertoire was very familiar to the crowd. Belgium really had so much to offer both nights. 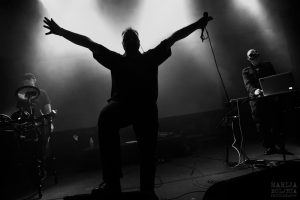 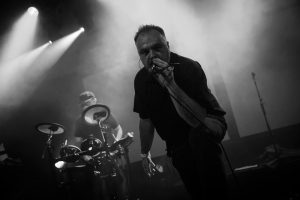 After this synth pop experience we got to see Signal Aout ’42. They threw a fantastically energetic show. Jacky hypnotised the crowd after a couple of songs, the venue was fully packed and the atmosphere was boiling. Jacky was adding the oil to the fire. We enjoyed the whole show, staying until the very end because there is no way anyone would want to miss this brilliant EBM adrenaline rush. 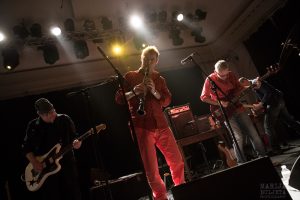 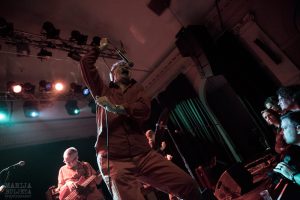 We didn’t quite know what to expect from the next band, Aroma di Amore, that was again completely unknown to us. Obviously, when it comes to the old school alternative Belgian scene, our knowledge was full of holes, but we were ready to try and patch them up. Aroma di Amore was quite a surprise after the Signal Aout. The bands had nothing in common, apart from the fact they were both from Belgium. We were back to guitars, bass and some brass instruments. Again a very energetic and alternative rock sound and performance.

However, one must eat and drink in order to endure this busy schedule, so it was time to take a break for refreshment before the A Split-Second show. 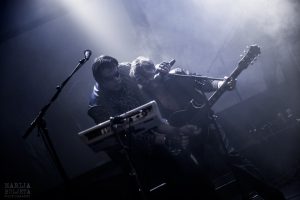 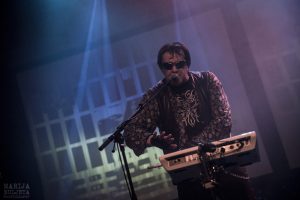 We were in the front row eagerly waiting to finally see them, since we were fans of the band who never had the opportunity to see them live, and we took effort to secure places just in front of the stage. Their show started to my utmost joy with Colonial Discharge. I reckon that it is one of my favourite tracks ever recorded in this genre. But what genre is it? It is surely not pure EBM. A Split-Second always had their own signature and style. There exist EBM bands and then there is A Split-Second. At least, that is how we feel about them. The show was amazing, to say the least. It was more like a hit parade, or at least it felt so to us since we treasure their songs so much that every single one is like a hit to us. It was a pity, though, that they played only the shorter version of Colonial Discharge, but it is not a dance track. They wanted to give us some more dance beats to shake up our slightly tired bodies. But when their beat kicked in, we simply felt like we had just had a red bull. I couldn’t take pics any more. All I really wanted was to dance. So I did. We remember hearing Backlash, Crimewave, Rigor Mortis, On Command, Vengeance C. O. D., The Colosseum Crash, Scandinavian Bellydance, Bend My Body Armor, Mambo Witch, Muscle Machine… and who could ask for more. The set list was a killer. They saved Flesh for the last one and I was almost in tears when they left the stage. Marc Ickx made such an appearance that I simply couldn’t capture on photos. I really hope to see them on stage again very soon because, to us, this was the highlight of the day. I was fortunate enough to run into Marc after the show at the bar and exchange couple of words. I shamelessly grabbed the opportunity to take a photo with him. Like a real fan would. 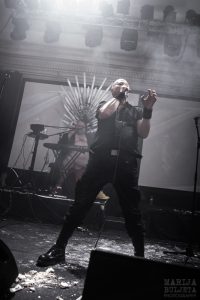 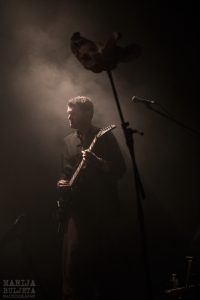 However, we could feel the great anticipation of the crowd for an exclusive a;GRUMH… show. I didn’t know what to expect from their live performance. I was warned by my colleague to protect my lens because, as he said, “you never know on their show”. And indeed. This was the most visually, but I must also add sound-wise, extreme performance. Whoever is interested in their set list can find it on the band’s official web site. They were shocking, there were no compromises. We saw pig heads, statue of the Virgin Mary being smashed, high voltage energy transmitted to the crowd who was pushing me against the stage. At times it was impossible to shoot. And during the encores I thought I was about to lose my equipment and maybe my head. After the second encore, during which they played Der Mussolini, I was just too scared of all the elbows and feet against my back, so I retreated to the back of the venue and we closed the chapter of BimFest thinking that this was one of the wildest shows we have seen, and we have seen a lot.

I was sorry though that we had no time to check all the merch stands better. The venue was beautiful and well organized into sections for merch, CD stands, bar, there was food available and the area out front for us smokers. Between the shows we managed to mingle and met a lot of welcoming Belgians that made us feel really at home. BimFest was professionally organized and this festival experience really comes close to the Infest one. Incredibly friendly people and organizing crew, wonderful performers and a happy crowd. We were sorry to leave. Especially me. These weekends are to be remembered and treasured when they happen, because not every event can be equally successful. This one surely was and we are already looking forward to the next BimFest in 2017.