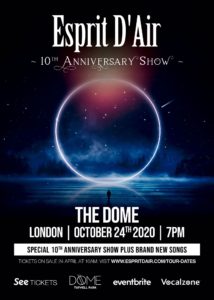 Esprit D’Air announce their 10th anniversary show at The Dome in London on 24 October 2020. The show will showcase their back catalogue, including their award-winning album Constellations as well as brand new songs that have never been heard before. The band is currently working on recording their brand new album, Oceans featuring singles, ‘Amethyst’ and ‘Calling You’, which were both featured on BBC Radio and Louder. Fronted by Kai on guitar and vocals, Esprit D’Air are joined by Jan-Vincent Velazco (Pendragon & Raymond Watts’ PIG) on drums, T.T. (Knights of Round, Unlucky Morpheous) on bass, Ryoma Takahashi on guitar, as well as special guests to be confirmed for the show.

Tickets for the show are on sale on 24 April 2020 at 10am from SeeTickets and Eventbrite UK.