For the past few years post-apocalyptic gothic cowboys, Fields of the Nephilim have celebrated the shortest day with their fans, by putting on a ‘Saturnalia’ show to London. For the Winter solstice of 2017 they were joined by fellow 80’s gothic acts Salvation, and Skeletal Family, at O2 Forum in Kentish Town. 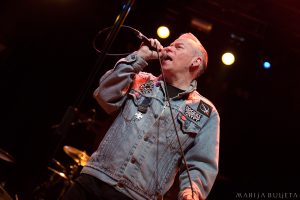 Despite have been interested in gothic rock for 20 years, Salvation are a band I could not remember hearing about before they were announced as support. After looking up their biography I was surprised to lean of their strong gothic rock pedigree. Their first single was produced by Andrew Eldritch and released on Merciful Release records. They are one of the numerous goth bands to emerge from Leeds the early 1980s along with Red Lorry Yellow Lorry and The March Violets, but have not managed to remain as well known. I was looking forward to checking out this band that had somehow passed me by. On experiencing them live I quickly realised why they have managed to slip out of gothic rock history. Their sound is on point melodic gothic rock, but nothing which sticks in the head, or helps them to stand out against those bands which have been better remembered. 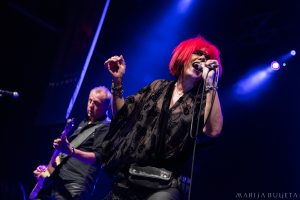 Skeletal Family are another Yorkshire goth band. Their sets consist of their own material and that of vocalist Ann-Marie’s other band, Ghost Dance (another band with links to Sisters of Mercy). I was really looking forward to seeing them perform live again, and their performance was in no way lacking, but personally I thought they were let down by the lighting and sound on this particular night. The light show was basic, and in my opinion too bright. Their sound echoed around The Forum, making it feel like they were playing to an empty room, despite there being a good number of bodies in the venue for their set. They opened with ‘So Sure’, played two Ghost Dance songs (‘Celebrate’ and ‘Last Train’) and closed with the classic ‘Promised Land’. All the classics squeezed into their support set. 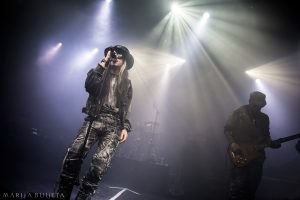 Fields of the Nephilim marked their entrance with what most would consider to be too much smoke belching onto the stage, but to me there is no such thing as too much smoke. It was my ninth FotN gig, and I cannot remember there being so much smoke before, and this is a band which always uses a lot! They opened with ‘Dead but Dreaming’ leading into ‘At the Gates of Silent Memory’. Right on cue for the climax of the intro, the thick fog appeared to dramatically drop thanks to clever stage lighting, to reveal McCoy decked in his trademark hat and sunglasses, roaring into the mic. The show as always was the trippy whirlwind, I have come to expect of the FotN experience. Reality forgotten while we are spellbound, soaking in the hypnotic soundscape summoned by this band which remain unparalleled, despite being in existence for over 30 years. 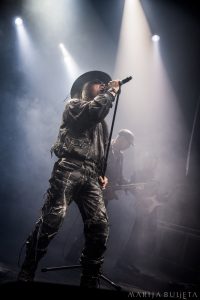 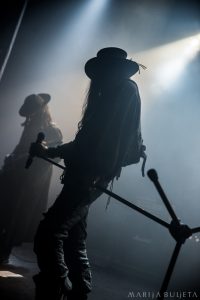 The sound was crispy and precise, some of the best I had ever heard for FotN. The previous two bands got screwed over in comparison. With the excellent sound quality, you could clearly hear how Tony Pettitt’s return to bass completes the Nephs live sound. They perform a 13 song ‘best of’ career spanning set, including their most recent single, prog metal behemoth ‘Prophecy’, already a staple of their sets. As always ‘Psychonaut’ is a highlight, where I and many others, lose my mind in the strobes and ritualistic chanting. The show could have ended there, and I would have been happy but there was more exquisite music to come. I was surprised and pleased that they chose ‘Mourning Sun’ from their last studio album to close the main set. Two encores followed, the first ending with ‘Last Exit for the Lost’, the second closing the ceremony with ‘Celebrate’. As always Fields of the Nephilim are the best live goth rock band that has ever existed.