It was Monday morning, after our walk along the promenade at Brighton beach. There were many seagulls flying on the bright blue sky when suddenly a sandy-coloured fog materialised as a filter in front of the sun. The temperature changed as the sun became a clear red dot that we observed without any eye-protection.

I guess that by then Gary Numan’s tour busses had to have arrived at the Brighton Dome, the venue for tonight’s concert of his ‘Savage’ world tour, simultaneously with the arrival of Storm Ophelia, that brought Saharan dust into the atmosphere and gave the sky this yellow-sepia appearance. 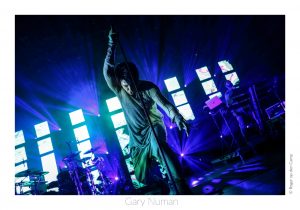 When one adds the strange burning smell, probably coming from the forest fires in Portugal and Spain, one could not imagine a more matching scenery for Gary Numan’s ‘Savage: songs from a broken world’ tour. Savage is a thematic album about a post-apocalyptic future where the Earth has been devoured by global warming, its remains mostly harshand barren desert.

The fragments from the latest video, ‘My name is Ruin’, were projected throughout the whole concert, accompanied by visuals of a burning planet.The band wore costumes representative of the harshness of the global warming post-apocalyptic world, even provided bottled Savage water for those thirty desert wandering fans. The whole concert was drenched in this ‘Savage’ atmosphere, even the ‘golden oldies’ like Metal, Down in the Park and Are friends Electric. It was held in the beautiful ancient venue, built in the early 1800s, whose moorish designs on the exterior could easily be imagined to be transformed into an abandoned location after the Savage storm has wreaked havoc. 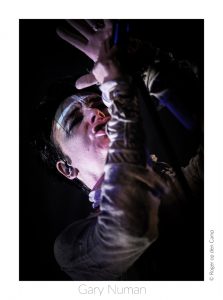 The song ‘Dead Sun Rising’ (performed in the Alessandro Cortini mix) was of course very relevant today because of the sudden climate change.

And fortunate for us we could experience the father-daughter duet for ‘My Name Is Ruin’ where Persia definitely overcame the bit of shyness we witnessed earlier at the Liverpool concert. She stood on that stage as a full band member, even letting herself move with the rhythm.

I’m convinced that she has a huge musically career ahead in the future. Hopefully that future will not be as savage as daddy’s prophesy.

setlist: Intro, Ghost Nation, Metal, The Fall, Remind Me To Smile, Bed Of Thorns, Dead Sun Rising (Alessandro Cortini mix), Down In The Park, Pray For The Pain You Serve, Here In The Black, Mercy, Love Hurt Bleed, My Name Is Ruin, Cars, When The World Comes Apart, A Prayer For The Unborn, I Die You Die, Are Friends Electric