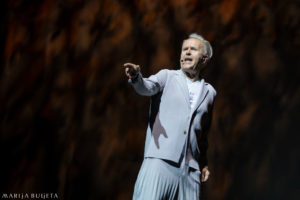 We started our long weekend at The London Palladium, where Howard Jones stopped on his Transform 35th Anniversary World Tour, supported by China Crisis. This tour covers Howard’s latest album Transform, released on May 10th, as well as a retrospective of his 35-year career so far. The audience for this type of event is usually on the older side; although this one was no exception, there were also some younglings accompanying their parents. We even heard one who couldn’t be older than 15 walking around and singing “Like to Get to Know You Well” followed by a stream of approving side glares from surrounding elders. Looks like good music is another thing to add to list of things that gets passed down through generations! 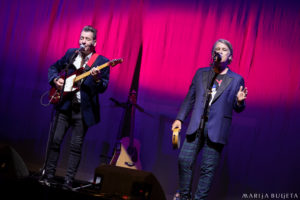 The show opened with a relatively short set by China Crisis in an already quite well filled venue. Having excellent stage presence and some really quaint chats with the audience between songs, they went through some of their greatest hits during a set lasting about 40 minutes, going from “Arizona Sky”, building their momentum throughout the show and finishing with “King in a Catholic Style” and “Wishful Thinking”. With nothing more than 4 musicians doing what they do best, China Crisis gave us a great show and prepared the audience for the main event of the evening.

After a 30-minute break to set the stage and refresh parched throats, Howard Jones entered the now full venue in 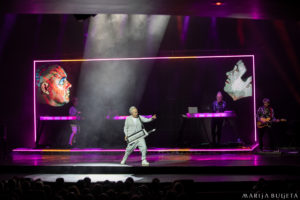 some kind of “Back to the Future”-inspired suit and opened his show with “Hide and Seek”, played solo on piano in front of a plain white background screen. The intimate feel of the show’s opening was quickly replaced when the background was fully lit, revealing his tour band. He was accompanied by two synth sets and a guitar. In that arrangement they played “Transform”, the title song from the current album, losing the white screen completely at the end and leaving no barrier between them and the audience. The concert continued, weaving through songs from Transform and his old heavy hitters, periodically returning to the piano for slower and more intimate 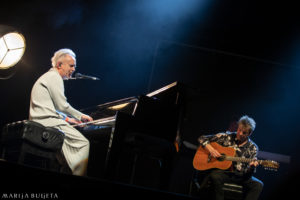 interpretations of a few of his songs, now accompanied also by Robin Boult on acoustic guitar. Gaps between songs were filled with various anecdotes, as it usually goes with artists who have a lot of years under their belts, adding even more atmosphere and character to a performance that already had both in abundance to begin with. A special place goes to the description of the process and circumstances in which “Life in One Day” was created, which was played first in its slower version, finishing off as the much faster song it eventually become known as. As it usually goes, greatest hits were pushed towards the end of the show ending the show with “What Is Love?” and “New Song”, at which point entire audience was on their feet waving and clapping. The band returned for the encore soon after, finishing off the evening with “Things Can Only Get Better”, followed by “Stay With Me” from the latest album, showing the merit of his new material. 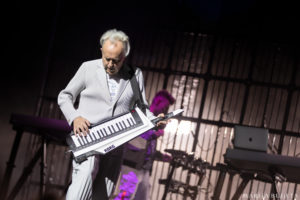 All in all, the evening was an extreme success, with the main issue in our eyes having nothing to do with the performance, but with the venue choice; The London Palladium being a seating venue, we felt that it clashed a bit with the danceability of Howard’s songs, especially accompanied by, at times, quite elaborate stage effects.