Hello DJ Wildhoney and thank you for taking the time to talk to us. Maybe it’s not fair enough to greet you as a DJ only, since you are indeed a person of so many interests. However, we need to start somewhere.

1. You come from Belgium, the country with a very active and vivid “underground” scene. At least that is how it appears to me. What is the alternative and underground music scene like in Belgium? Can you bring it a little bit closer to us?

The scene in Belgium is not as big as in Germany, although there are a lot of good Belgian artists, bands, organisers, magazines, photographers and DJ’s. Every week parties and gigs are being organised, sometimes very underground and sometimes more mainstream. More parties/festivals are being organised nowadays in general, since the new-wave revival is going on, and people in their forties and fifties want to hear “their” music from before again. 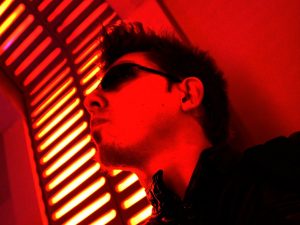 2. You have been a DJ for quite some time now. Can you tell us where you played so far? At what kind of events, clubs and festivals could people hear your DJ-sets?

I’ve been DJ-ing since 1993. I played at private parties, concert afterparties, festival warm-up parties, before and in between bands at concerts, club parties, special event parties, CD-release parties, festivals and self-organised parties as well. As a guest-DJ I’m mostly asked to play a 2 hours-set. I was resident-DJ in a club in Germany and I played many release parties for the German band OOMPH! Recently I played a set at Sinner’s Day festival in Belgium and soon I will be playing as resident-DJ again at the New Wave Club Class-X Party, which is one of the biggest new-wave parties in Belgium.

Well, I don’t think there’s a standard recipe for this because every party is different. At some parties, I am asked to play a lot of classics and sometimes I have “carte blanche” so I can do my own thing. There’s no art in playing “hits” just to make sure you have a full dancefloor all the time, everybody can do that. I love it when my mixture of old and more recent stuff, classics and more unknown stuff satisfies everyone. Oh, and I like to colour outside of the lines as well and surprise people … I think it’s important to look at your audience when you’re DJ-ing. By recognizing friends and acquaintances and reading what band t-shirts people wear you can easily find out what stuff you should play for sure. It’s your job to please the audience in the end, not yourself, although people sometimes can make it a bit annoying by asking the same requests over and over again.

4. Still haven’t asked, but what genres and bands in particular do you like to play and who is your audience?

Audience: anyone who likes these genres/bands … 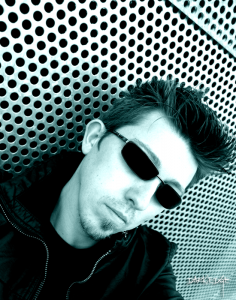 5. You surely have fun doing it and have many nice stories from your DJ-career. Have you ever had some difficult times as a DJ? Let us know about your experiences.

Mostly technical issues can be a pain in the ass: a cd-player (yeah, I’m still old-school) that is defective is not your own fault and is not pleasant when you quickly need to get the next song ready. In my earlier years, it sometimes happened that electricity fell out because we were playing too loud and amplifiers got overheated. Once I had to play a party where it was very dark, where I totally had no lights on my DJ-panel (!), except 1 strong white spot that was continuously frontally shining straight in my face from a stage about 30 meters away, blinding me. As a result, I had a serious headache after a while. Most ironic is that I had just bought a new pair of sunglasses that same day, which I didn’t bring with me, although they could have saved me.

6. What do you think about the global state in this particular scene and current trends in regards to music-making and being a DJ?

Well, some people can be DJs and also make good music as musicians. But I still cannot understand how an audience can “worship” a DJ so much, especially if the DJ just plays music that was made by another band/artist, like it happens a lot in the dance scene. The respect should go in the first place to the original band/musicians and not to the person who is only playing their songs, no matter in which way he does it, for a ri-di-cu-lous amount of money! When I visit a party, I like it most when the DJ plays the songs in full, with only bit of mixing in the end, into the next track (like I do). Mixing songs before they are even finished, are more for the commercial techno/dance scene, not for new-wave and punk. It still should be a bit raw and hard, you know? Recently too many bands are copying each other a lot in the way of singing and using the bass-guitar, it looks like suddenly the new trend to be cool is to be a postpunk/coldwave band.

7. You are a frequent visitor of German festivals as well. Can you draw some lines between Germany and Belgium in that sense?

I frequently visit German festivals such as Amphi, M’Era-Luna, Wave-Gotik-Treffen, E-Tropolis, etc. Those festivals are well-organised and much bigger than anywhere else because “Gothic” music is much more accepted by the German people and still a part of the mainstream. From time to time a band belonging to “our” scene can even have a Top-10 hit there. Many Belgian bands played in Germany already and have Germany as their biggest fanbase. For a lot of people new-wave died at the end of the ‘80’s, when the genre went out of the mainstream to go underground again … But this is totally not true, new-wave and punk subcultures were always there and are still alive, although smaller than before and a bit more divided into subgenres.

8. If I remember correctly, you have DJ-ed outside Belgium as well. Where would you like to DJ next? Any particular country, festival or event?

Besides a lot of parties in Belgium I also played DJ-sets in Moscow, Berlin, Hamburg, Aachen, Oberhausen, Frankfurt, Paris, Eindhoven, etc. I would love to play in London and Los Angeles or New-York someday. 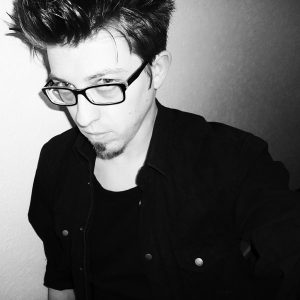 9. Your last DJ-set was at Sinner’s Day festival on 20 November. How was that experience for you?

It was a blast! The DJ before me ended with “My Way” of Sid Vicious and I started playing just before PiL. So I opened directly with Exploited (“Sex And Violence”), followed by Crass (“Do They Owe Us A Living?”) and Pixies (“Crackity Jones”) and the audience went crazy. There were about 7000 visitors at the festival and if you didn’t like a certain band you could come to party in the DJ Room, which was an awesome concept!

10. However, your interests go beyond DJ-ing. You also like to explore photography. We can find you in the photo pit on some live shows. Can you tell us something more about that? How did you become involved in photography?

I always liked to take pictures ever since I was very young. It’s really amazing what nice shots you can make nowadays with a digital reflex-camera. Everything depends of course on the right timing and angle, the kind of lens you use and how good you are in post-editing. Since I write for Side-Line Magazine I have the chance to shoot the artists I like from a close distance. It’s not always easy (because of smoke and lights) and it takes a lot of practise. I also have to take a lot of pictures for my job as freelance social media manager/webmaster for companies. My uncle was a photographer, so maybe I was indirectly inspired by him? Anyway, compared by some other concert photographers I still have a long way to go.

11. You are also a social media manager of two legendary bands, DIE KRUPPS and OOMPH! What does a social manager do in fact? How did you become one?

I am freelance social media manager and also webmaster for OOMPH! and DIE KRUPPS. The guys of OOMPH! Have been friends of mine since 1993 and I supported them since the very beginning. When the social media started being used by a wider audience (around 2007), and bands picked up on its importance more, I asked the band to do it. Jurgen Engler of DIE KRUPPS once posted on facebook that he was struggling with a few issues and I spontaneously helped him out. After that I proposed to work for him, mentioning OOMPH! as a good reference, haha. Both bands asked me to make a new website for them as well. Believe me, it is a lot of work creating banners, editing pics, posting and reposting pictures, movies, announcements, updates, etc. on all different kinds of platforms as Facebook, Twitter, YouTube, Tumblr, Google+, VK, …

12. I also have to mention you are one of the writers at Side Line Magazine. That publication has a long tradition. What do you write about? Do you choose to write only about the artists you personally respect and like or does your writing go beyond your personal tastes? 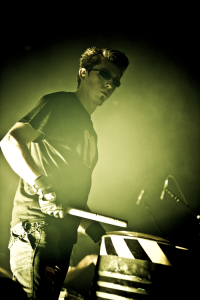 13. You were also involved in collaborations with some bands by playing live on stage. Can you tell us more about that? I have seen some live footage. 😉

Yeah, I did some stuff in a few projects but the most noticeable was in 2009 when I started playing in RevCo World as a guest-musician (percussionist + backing-vocalist). RevCo World is like a European version of Revolting Cocks, featuring original founding band-member Luc Van Acker, who is a good friend of Al Jourgensen (Revolting Cocks, Ministry). With RevCo World I shared the stage with bands as DAF, KMFDM, Killing Joke, Vive La Fête and Anne Clark.

14. You also run a weekly podcast on mixcloud called switchbLack. Firstly, how did you come up with the name and what do you play there? Give us some hints.

15. I have to mention that you are also involved in martial arts. I’ve always been interested in learning more about that. Can you describe shortly how exactly that passion of yours started and the story behind it?

In 1988, on my 17th birthday, I saw a demonstration of martial arts (traditional Japanese armed and unarmed self-defense) in my hometown. The week after I decided to join the club. Later on, I became a black-belt Instructor and I took over the club. Nowadays I’m the head of 3 martial arts clubs and I travel frequently to Japan and other countries worldwide to train in a very strict way under a Japanese Grandmaster. It is not a hobby but a way of living. Even after 28 years training it is still so amazing to discover not only new physical techniques but also to learn more about history, anatomy and spiritualism.

16. What are your future plans for Side-Line Magazine and your DJ-career?

Well, I am very honoured to tell you that I will be DJ-ing this year at the German Wave-Gotik-Treffen in Leipzig and next year I will play in Tokyo! Soon I have the honour to meet and have a very exclusive interview with a legendary German female artist for Side-Line Magazine, surprise, surprise!

17. Please provide us some useful links so we can follow you as a DJ and a photographer. We’d like to see more of you. 🙂

Thank you very much for your support!