The Mute artists, Komputer, are rebooting for a rare live show in London. They will be playing the best of their work of Komputer, I Start Counting and Fortran 5. The duo of Simon Leonard and Dave Baker captured the imagination of label boss, Daniel Miller, who produced their first singles, “Letters to a Friend” and “Still Smiling”. They joined the influential label in 1984 as I Start Counting. Although their style grew 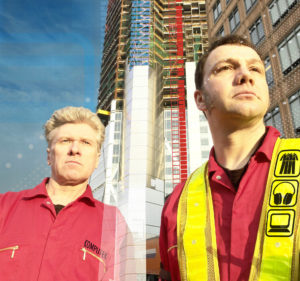 from experimental roots, their music developed, becoming more focused on the dancefloor and they evolved into Fortran 5. As Britpop consumed the rave scene, Baker and Leonard decided that it was time for another change. Komputer was born with a sound that developed on the heritage of the German electronic pioneers, Kraftwerk. They drew from inspirations as diverse as the walking trail from Archway to Alexandra Palace (“Looking Down on London”) and the first woman in space (“Valentina Tereshkova”).

The band toured with Erasure and provided a remix of their hit, “Victim of Love”. Blancmange (“Cruel”) and Metroland (“Enjoying the View”) have also been reworked by Komputer in the studio.

Komputer are working on new material, but most recently appeared on the Mute compilation, STUMM433, with a version of John Cage’s composition, 4′ 33″.