On Sunday we went to O2 Academy in Islington to round up a quite eventful weekend of live performances in London with the final show of Leaether Strip’s, celebratory, 30th anniversary UK tour. 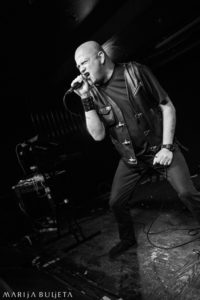 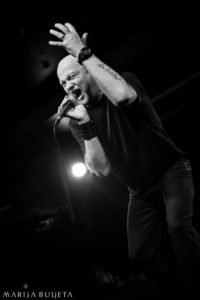 The London gig was supported by Machine Rox, My Hysteria and Mechanical Cabaret who all did an excellent job of warming up the crowd, which was, quite possibly, larger than expected after all the drama of And One cancellation. Even before the show, Claus Larsen of Leaether Strip was mingling and taking photos with fans around the merch stand; he was rather ecstatic to go on stage and show what he has been doing for last 3 decades.

Show opened with “Don’t Tame Your Soul”, followed by “Erdbeermund” from current World Molaester album, which was accepted quite well by the crowd showing that even by going independent with his Laebel label, Claus Larsen still managed to find a way to his fans. Throughout the set he played most of his hits including “Black Candle”, “Black Gold”, “Civil Disobedience”, “White as Chalk”, “Strap Me Down”, “Don’t Scream at Me”, 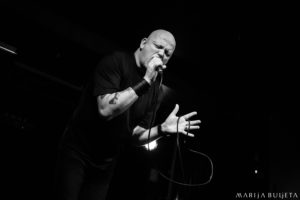 “Evil Speaks” and “Adrenaline Rush”. Special mention should go to “Japanese Bodies”, since it was his first release, which marked the beginning of Leaether Strip, as well as “Desert Storm” from Claus’ main side project Klutae. Among his songs he also managed to incorporate his interpretations of “Sex Dwarf” by Soft Cell and Fad Gadget’s “Lady Shave”, which provoked really fantastic response from the crowd who never stopped dancing throughout the show. At the end of the show, Claus got introduced to the UK concept of curfew, but after brief discussion with the sound guy, he was able to finish the concert on his own terms. It helps being the biggest guy in the room.

All in all, the entire evening was quite enjoyable and we are pretty sure everybody who came out had a great time, wanting for, as Claus said it, “The Dane to come back”.