On 20 July 2019, Living Colour visited Northampton during their UK tour in celebration of the 30th anniversary of Vivid. It was our first opportunity to see this legendary rock band… although Living Colour can’t be labelled so easily. Their music is a very interesting and inspiring mix of hard rock, metal, funk, even hip hop and jazz; their musical expression is so rich and their songwriting utterly clever and thoughtful. They have been challenging the definition of music and pushing boundaries since the 80s and it was a real treat to hear their 1988 debut album Vivid played live in its entirety. 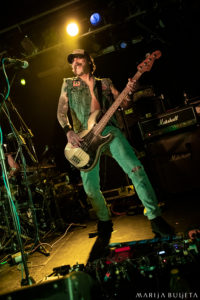 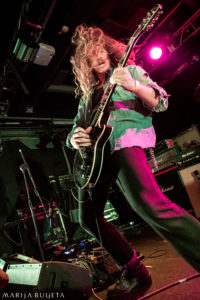 Before we could see Living Colour on stage, we were introduced to Jared James Nichols, an American blues-rock guitarist and singer who was accompanied by a drummer and a bass player. We were immediately swept away by the trio’s sheer power and energy. Although they came on stage early at 7:30 PM, there was a decently-sized crowd already gathered to enjoy this young act. Their sound could be described as pure rock, the kind of rock that couldn’t really get any better; their performance was that great. Even if you’re not a huge rock fan, you would undoubtedly like this band. They are so much more than just music, they are true entertainers as well; their show was a real rock n’ roll experience. Although their set list was rather short, their performance was explosive, solid, concrete and the band was really well rehearsed; sometimes you just need 3 great musicians to put on a great show and Jared was so energetic on his guitar. They mainly stuck to their 2017 Black Magic material which included “Last Chance”. “Don’t Be Scared”, “Honey Forgive Me” and “End Of Time”. Alongside that, they introduced a new single “Nails In My Coffin” which sounded as promising as the rest of their material. If you’re looking for a real rock vibe, these guys can undoubtedly pull it off without sounding pretentious; they are a genuine rock band all the way. Big thumbs up for Jared and the band! 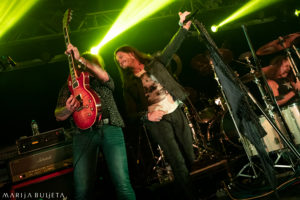 The second band we saw was Cats In Space. We were completely unfamiliar with this band too, but we saw that was not the case with the rest of the crowd, as there were people in their t-shirts who knew every song; that proved the band has a really good following. They have released 4 albums since 2015, but got only 30 minutes to present their repertoire. They opened with “Johnny Rocket” from Daytrip To Narnia and played “Narnia”, “Hologram Man” and “Thunder In The Night” from the same release. Although they are a new band, it is formed by musicians with impressive musical background. Their performance was exceptional and it’s no wonder they already have so many fans.

At 9:30, Living Colour took over the stage. A massive applause and cheering could be heard as they came onto the stage. We knew they would play Vivid in celebration of its 30th anniversary but they announced a few additional songs. The first song they played was “Ignorance Is Bliss” from Stain. The crowd was already warmed up and they hit it off immediately. There was just pure energy from both sides of the stage! 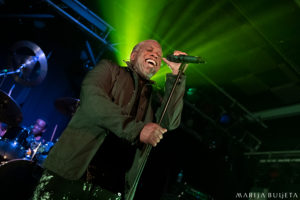 Corey announced Vivid after the first song and said they would play the entire album if we didn’t mind, and the crowd cheered again in approval. Of course we would love to hear all of Vivid, and if possible, ON REPEAT!
We knew the first song to be played was “Cult Of Personality” and the devoted crowd supported Corey by singing out loud. It was one of those special moments you wish to experience at every show. I remember the first time I heard Living Colour, I thought “God, this is impossible”, but sure enough, it wasn’t. The fact I was hearing those songs live was yet another proof that this band isn’t a dream, it’s as real as their talent is. You can’t really get much greater than this. That’s how I’ve always felt about them. They are four utterly exceptional musicians and artists who were ahead of their time; their songs are as relevant today as they were in 1988! Vivid is not “vivid”, Vivid is truly alive; it’s timeless. During the show you could clearly hear what they were all about; there was rock, there was funk, there was simply everything I considered great in music. “Desperate People” blew our minds completely. However, what came after blew us away even more: Corey’s vocal 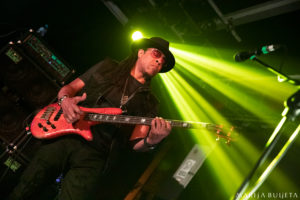 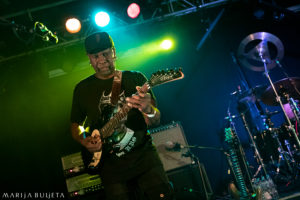 performance of “Open Letter (To A Landlord)” left us speechless. I thought about what I had heard a long time after the show; how is that possible? Well, Corey is simply an incredible singer. “Funny Vibe” got everyone singing and jumping again and so did “Glamour Boys”. “What’s Your Favorite Color?” became like the show anthem. The encore was getting close as there was only one more song from Vivid and it was “Which Way To America?”. Corey introduced the band and we could hear solos from Will on drums and Vernon on guitar. The most peculiar solo was Doug’s improvised bass line of Queen’s “Another One Bites The Dust” which suddenly became Metallica’s “Enter Sandman”. 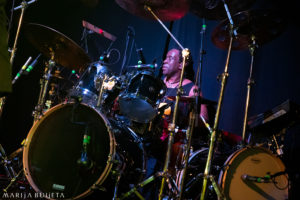 The band really didn’t have enough time to leave the stage for long as the “time was up”; they returned quickly and played the song that everyone was so anxious to hear: “Love Rears Its Ugly Head”. The crowd was taking over and Corey let us sing the chorus instead of him! And as time was really up, they fittingly played “Time’s Up” as the last song. The band was overwhelmed by the immense emotional reaction from everyone in the venue and they really didn’t want to part with us. They gave off the impression that not only they were great musicians, they were lovely people too; they showed much appreciation for their fans. Will threw his drum sticks into the crowd and that’s the last image we took home with us. We hope they will return soon and maybe do a 30th anniversary tour for “Time’s Up” as well, as we’d love to do it all over again! 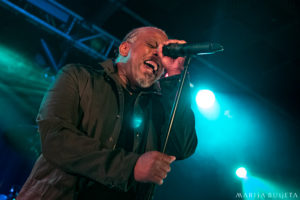