On Friday, 21st June, we went to O2 Shepard’s Bush Empire to see the long overdue live show by Aussie legends Men At Work, supported by the apparently immortal Lene Lovich and her Lene Lovich Band. As usual, the audience demographic was more suited for some more formal occasion, but these kinds of shows have a tendency to bring out fountains of youth and euphoria in an otherwise more serene crowd. 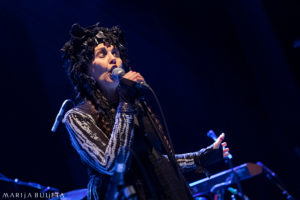 At 8 sharp, Lene Lovich Band took the stage and started off energetically with “Tonight” from their 1978 album Stateless. It was enough to wake up the audience and keep them moving throughout the rest of their 30-minute set. Hits rolled one after another, accompanied by unbelievable stage energy emitted by Lene and her unique vocals. In the span of this relatively short set, the band managed to squeeze in more than enough material for the audience to be satisfied, though we felt it could have been a bit longer. They stuck to Stateless material and we were lucky to hear some of our favourite songs: “Lucky Number”, “Home” and their wonderful cover of “I Think We’re Alone Now”. The band’s performance was flawless and Lene mesmerised everyone with her voice, peculiar style, striking moves, and her sax playing skills.

After a 15-minute recess to prepare the stage and refill glasses, lights went out and five musicians, accompanied by Colin Hay, the only original member of Men At Work remaining in the band, took the stage for the main event. As this was the band’s first appearance in London since 1983, it would be an understatement to say that audience was wanting; there were very few people in the audience who didn’t know every lyric that was sung throughout the next hour and a half. Accompanied by this group of excellent session musicians, Colin Hay took us on a journey throughout the 6 years in which Men At Work produced their 3 studio albums – albums which are, as it seems, timeless classics. 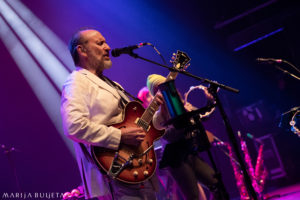 They opened the show with “Touching The Untouchables” from their 1981 album Business As Usual. Two songs from Cargo followed, “No Restrictions” and “Dr. Heckyll And Mr. Jive”. The crowd got frenzied during “I Can See It In Your Eyes” and even more so during “It’s A Mistake”. Colin and the band gave an outstanding performance and the energy on stage was just mind blowing. Colin introduced us to the band members, and made a few remarks between songs; it was an honour to be able to witness that magnificent performance. Songs from Business As Usual, Cargo and Two Hearts were entwining and they maintained the dynamics thorough the show. They kept the venue dancing with “Underground”. Even slower songs like “Catch A Star” and “Children On Parade” didn’t cool down the fans! The first sounds of “Who Can It Be Now?” turned the venue into a disco, and the band seemed to have as much fun as we did; love was really in the air! It was the love for the timeless classics which sounded as fresh as they did almost 40 years ago. Fans waited for too long, but it seemed Colin and the band knew that very well and made amends. 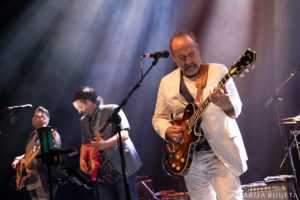 Before the final three smashing hits, we heard a new song “Come Tumblin’ Down” which would be the perfect closer before the encore; however, that didn’t happen the way we expected. They continued with breathtaking “Overkill”, by which time we could suspect that “Down Under” should be one of the next songs. Colin introduced it by saying it was the best song he’d worked on so far, and he is probably right. However, he reserved the right to feel optimistic and yield the hit which would match its success. “Down Under” is indeed one of the best songs ever written, and it was a privilege to hear it live. Hay funnily explained that there was no point to go behind the stage and come back for the encore and they indeed never left the stage. They left everyone in high spirits with “Be Good Johnny”, the last song on the extensive set list. It was the perfect finale for an astounding 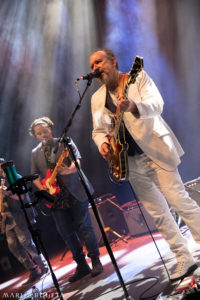 night at the O2 Shepherd’s Bush Empire. The night will surely be remembered for a long time, whether you were Lene Lovich’s or Men At Work’s fans, or in our case, both!