M’era Luna 2018 took place on the Hildesheim airfield, south of Hanover. Festival revellers were blessed with pleasant, sunny, but not too hot weather, a contrast from the previous year’s mud-fest. The festival attracts well over 20,000 revellers to a strong line-up of bands, with a side medieval market, fashion shows and workshops, clothing and music merchants, and a good mix of food and drink outlets. Many will camp at the site in tents or campervans, however your reviewer and photographer took the more comfortable options and stayed at one of Hildesheim’s hotels for a little more comfort and a hot shower to wash off the day’s dust. 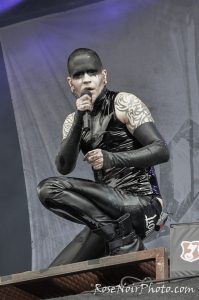 On the first day, The Lords of the Lost’s, Chris Harms commanded the crowd to rock, to which the crowd obeyed with a sea of hands giving the metal salute during the opener “On This Rock I Will Build My Church” from 2018’s “Thornstar”. Audience participation continued throughout the set of new songs and old favourites, going right back to 2009’s “Dry the Rain”. Lords of the Lost have such a strong stage presence which really fired up the crowd, so much they wanted to get nearer to their fans – Chris Harms moving to the barrier to get closer during “Blood for Blood” and guitarist Pi crowd-surfing during “La Bomba” 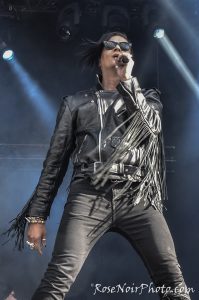 “We are The 69 Eyes and this is Goth and Roll” proclaimed Jyrki 69 to announce their entrance. More crowd pleasing antics during a set covering 1999-2016’s output, including the favourite “Gothic Girl” with its screaming guitar solo. “Jet Fighter Plane” had Jyrki 69 spinning around the stage in his fringed leather jacket. It’s always fun listening to and watching the glam-rock influences of The 69 Eyes live. 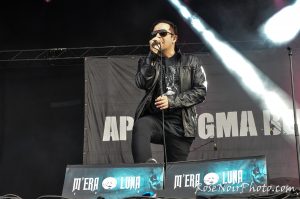 Opening with the stirring “O Fortuna” sample in “Love Never Dies”, Apoptygma Berzerk make a grand entrance. Stephan Groth announces “this song is 25 years old”, about this year’s re-release of “Burnin’ Heretic” but with Apop’s energy on stage, it’s still as fresh as the day it was released. Guitarist Audun Stengel directs the crowd to sing along with the “Non-Stop Violence” chorus, before a change in tempo with keyboard player Jonas Groth taking the centre stage to take over the singing duties on “Nearer”. The tempo lifts again, for the rest of the set, encompassing a rave during “Starsign” and finishing the riff from “The Man Who Stole the World” and big keyboard bends during “Mourn”. 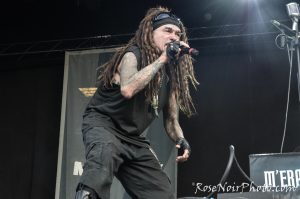 It’s now time for Ministry, and after a few sound issues earlier on stage, with drop-outs during vocals, the sound-check thunders across the field – this is going to be LOUD! A recording of “I Know Words” with Anti-Trump visuals showing the White House, Putin and Kim Jong-un amongst others announce Al Jourgensen’s anger about the current political state of the USA. After removing their masks, they play a set highlighting this year’s “AmeriKKKant”, and the mosh begins in the pit. Antifascist flags and the giant Trump-esque inflatables swathing either side of the stage feature during “Antifa”. To finish, it’s time to go back to a blistering “Just One Fix” and finish with “So What”, a reflection on the band’s 36-year history. 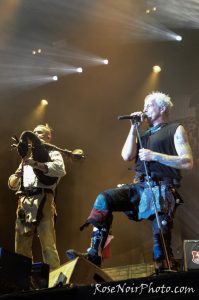 Time for a change in style with In Extremo’s medieval rock. The medieval instruments showcased heavily during their set list with a shift to the more classic metal combination of drum, bass and guitars, with a bagpipe featured during “Unsichtbar”. The “Quid Pro Quo” album features even more medieval instruments than past releases and these were enthusiastically played by In Extremo in time with many pyrotechnics. The crowd loved joining in, especially during “Rasend Herz” and “Frei zu sein”. 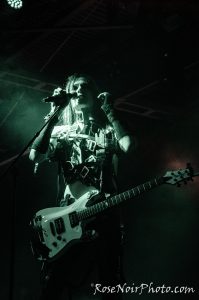 Time to finally move to from the main, open-air stage to the Hangar stage to see London After Midnight’s only European show this year. Screens announced their new album “After the End of the World” would be coming soon! The band walked out, throwing roses to the audience. Sean Brennan looks amazing; however the set seems plagued by sound problems. This doesn’t dampen enthusiasm from the crowd, especially during songs such as “Your Best Nightmare” and “Kiss”. The title track from “After the End of the World” is drum-driven with a faster tempo and big guitar sounds. LAM also aren’t proud about the current US political state with graphics and text showing statistics about American conservatives. “It’s awful, it’s fucking hell” implores Sean about Trump, followed by comments about the bad state of underground records. Towards the end of the set the Prodigy have started their headline set on the main stage and the sound thunders into the partially open-sided Hangar Stage. Sean thanks the crowd for coming to see them, despite Prodigy playing at the same time. Finally, LAM finish with a crowd-pleasing “Sacrifice”.

Meanwhile The Prodigy had amassed a full field for their headline set. The crowd are in the hands of Keith and Maxim revving them up, the set finishing with “Smack My Bitch Up” and an encore of “Their Law”. 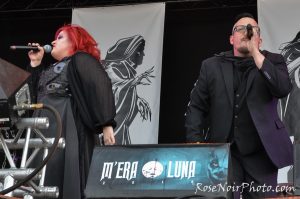 The contrasting voices of Thomas Rainer and Sonja Kraushofer with a background of live beats and interpretive dance from L’Âme Immortelle started our second day at M’era Luna. The vocal leads switched between the pair, alternating songs between German and English lyrics. The ethereal “Fallen Angel” slowed the pace, reminiscent of Sonja’s side project, Persephone. It was straight back to the beats with “Schwerkraft” and Thomas asking “Where’s the rain?” – very appropriate on a hot, sunny day. 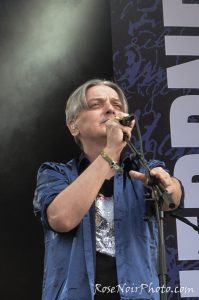 “Hallo Hildesheim, hallo M’era Luna” greeted Peter Heppner to a rapturous crowd. In contrast with many of the other bands’ costumes, stage postures and special effects, this was a performance of wonderful songs by a songwriter with a great voice. Heppner’s set included the Wolfsheim classics “Once in a Lifetime”, “The Sparrow and the Nightingales”, as well his work with Schiller, “Leben… I Feel You”. As a treat for M’era Luna, Heppner introduced Joachim Witt to sing “Die Flut” together, a song originally released 20 years ago. It was then time for a live premiere of their new single, “Was Bleibt”. The Wolfsheim song “Kein Zurück” resonated with the crowd emotionally, before a joyous finale of the Paul Van Dyk collaboration, “Wir Sind Wir”. 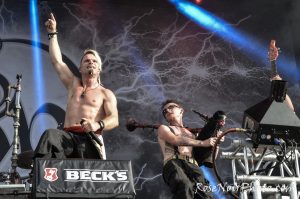 It wasn’t long before crowd-pleasers, Saltatio Mortis, quite literally ignited the festival with their medieval metal set to pyrotechnics, the enthusiastic audience clapping and waving their arms from the start of their set. This was a performance filled with audience participation, with everyone crouching down and jumping up on cue, and singing along to “1,2,3, Feuer!”. The band took the opportunity to present their new single “Große Träume” from their new album “Brot & Spiele” released on 17th August. Even if you didn’t know the band that well, you couldn’t help getting caught-up and smiling with the infectious fun of these live favourites. 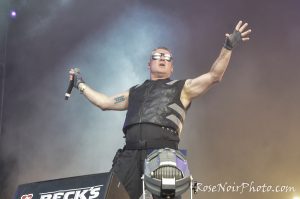 It may be over a decade and a half since we’ve seen a new studio album from Front 242, but with such a strong catalogue of music, European festival audiences are always delighted to see the Belgians on stage; M’era Luna was no exception. The band gradually comes on stage in masks, with Richard 23 taking the lead vocals on “Happiness” before Jean-Luc de Meyer joins the trio for a set that evoked their 2008 live release “Moments”. You can’t see Front 242 without “Headhunter” and they didn’t fail to please. 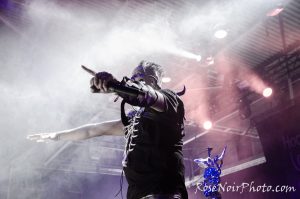 The Hangar Stage was packed for Hocico, which points to the quality of artists at this year’s M’era Luna, given Eisbrecher were headlining on the main stage at the same time. “Hope you’re doing alright, ‘cause tonight you’re fucking alive” was the response from Hocico’s vocalist Erk Aicrag, before commencing their furious, hard beats and aggressive vocals. Seeing Hocico live, you forget they’ve been around for 20 years.

Thus, the live performances were over. Revellers took photos in front of the giant letters spelling out M’era Luna, before getting some final shopping and heading to the Medieval Market for fire-twirling performances. An unofficial after-party continued late into the night, after one festival goer setting up giant speakers on their car and attracted revellers to stay and dance. And so endeth M’era Luna for 2018.