On 15 October 2019 we had the opportunity to see Midge Ure and Rusty Egan on the same stage which was undoubtedly a dream come true for Visage fans who came to see the two original members perform Visage classics. Before we could hear any of those, the crowd was introduced to the show by Rusty who 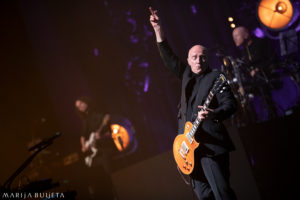 gave us a lecture on Djing and 80s synth pop and new wave scene. Rusty had prepared samples of some of the greatest hits from the era which were accompanied by interesting stories; we could hear bands like OMD, Human League, Spandau Ballet, Numan and oddly enough he finished his storytelling with The Cure’s “In Between Days”.

After Rusty’s music class, we were allowed to grab ourselves a drink and prepare for what could be described as one of the best 2019 shows so far.

Although the Visage set was rather short, we enjoyed great songs like ”Visage”, ”Blocks On Blocks”, ”In The Year 2525”, ”Mind Of A Toy” and of course ”Fade To Grey” which was followed by standing ovations. Seeing Midge and Rusty performing those songs together warmed many hearts and the audience was cheering loudly by the end of the song. 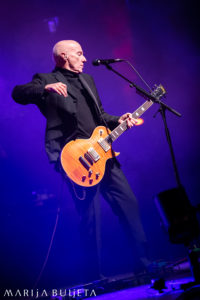 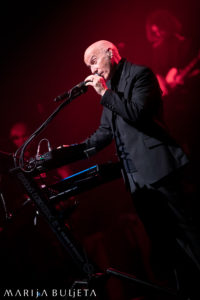 Without a break, the band went on with the Ultravox repertoire. The Vienna set list was played next, starting with ”Astradyne” which sounded flawlessly. A huge emotional response was suscitated by ”New Europeans”. Half way through the night we could hear ”Passing Strangers”, the song which already got the first few dancers. However, the up tempo ”Sleepwalk” got even more people on their feet and Midge invited the audience to get to the front and just dance. We especially enjoyed the absolute precision and synth sound of ”Mr. X”. Throughout the set Midge was switching between the synth and the guitar and he practically owned the stage, as the rest of band was placed far behind. Dressed in the black suit, his presence was captivating and elegant, his moves and expressions energetic and passionate. And the atmosphere was even more heated with the first sights of smoke and mist; we knew ”Vienna” would be played next. It was a captivating moment that almost brought us to tears and Midge delivered such an emotional vocal performance that left us speechless. However, the dancing part of the audience returned to their 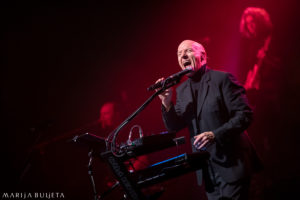 positions at the sounds of ”All Stood Still”; it seemed no one really did. Although the song left us in high spirits, we knew that surely wasn’t the end of the brilliant repertoire. Indeed, Midge and his Band Electronica came back two times! They played ”Passionate Reply” and everyone’s favourite timeless hit ”Dancing With Tears In My Eyes”. However, Midge and the band weren’t tired yet. After an hour and a half they had energy and love to give us more. Two hits followed: ”The Voice” and ”Hymn”. To be honest, we really couldn’t tell which sounded better! Midge proved he rightfully owns the title of one of the best songwriters and performers in the genre, while songs proved they stood the test of time.