On July 21st we went to O2 Forum in Kentish Town where Ministry promoted their current album AmeriKKKant. After the opening act left the stage, the crew started preparing the stage for the main event, placing two white balloon chickens with Trump-like tops and crossed swastika signs on the front corners of the stage, thus setting the tone of the evening. 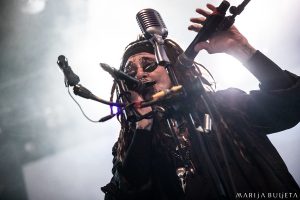 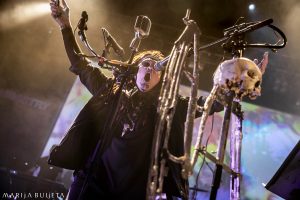 Although shows from bands with long careers generally attract middle-aged crowds, which also turned out to be true in this case, there was a decent number of younger people in the audience, waiting for Al Jourgensen to deliver them their gospel of anger and frustration. As always, they received it in abundance. 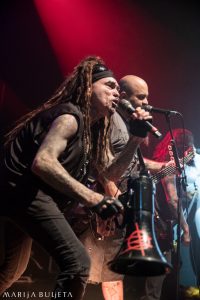 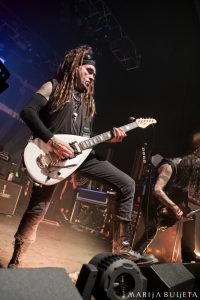 The show opened with “Twilight Zone” and “Victims of a Clown” from the current album. The performance was heavily accompanied by images and snippets of Donald Trump and his speeches, projected on the video wall in the back. The balloon chickens started their dance as Al’s punching bags, giving it all a slightly surreal satiric experience.

After initial showcasing of the new material, the band played “Punch in the Face”, “Senor Peligro”, “Rio Grande Blood” and “LiesLiesLies” from their 2000’s albums, which got an already lively crowd into an even more intense mood, which in turn produced the first batch of the middle-aged men who, covered in sweat, came out of the moshpit for a breather. 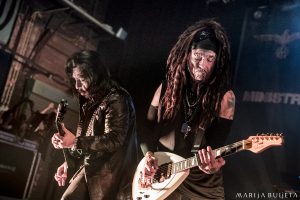 Promising the audience that there was plenty more of the same to come, the band played “We’re Tired of It”, “Wargasm” and “Antifa” from AmeriKKKant before the venue erupted again on the first hints of “Just One Fix”, followed by all stars “N.W.O.”, “Thieves” and “So What”, which marked the end of the regular part of the show. 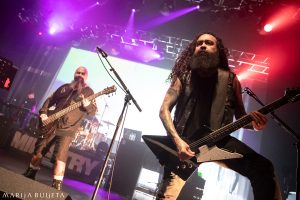 Band returned and performed “Psalm 69” and “Bad Blood” to close the evening, giving everyone what they came for. Although the audience reacted ecstatically to the band’s older hits, new material, focused on the current situation in USA and the acting president, also held its ground and blended easily in the Ministry’s body of work. If anything, it was obvious that even the songs created in 80s are as relevant today as they were the day they were created. This will almost certainly hold true for AmeriKKKant in the future, since it looks like things never change. The setlist that spawns for more than 30 years proved that last night.