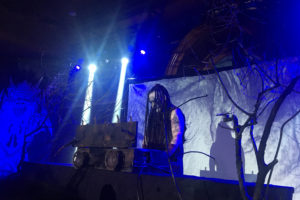 The genre-defying Mortiis has an impressively broad catalog of albums, ranging in styles from metal to ambient. At The Lodge in Los Angeles on Sunday April 7, he played a solo set of exclusively Era I material.

Openers Wilshire Corridor and Minor Conquest were a compelling addition to the lineup. Solo artist Minor Conquest started the set, lurking in the shadows of his synths in sunglasses and creating a commanding presence with ethereal sounds. Dark experimental duo Wilshire Corridor was up next, with reverberant, dissonant vocals, harsh rhythms, and shrieking analog synths.

The visuals alone were simple yet effective in setting the dark mood: a masked Mortiis stood in front of his synths, which were set up in a 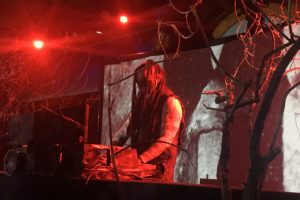 bizarre toolbox that looked like a prop from Terry Gilliam’s Brazil or some sort of surreal nightmare. The lighting alternated from harsh to red and cast the skeletal-looking tree branches onstage into shadow.

In addition to some exciting new compositions, the set included sections from “Ånden som Gjorde Opprør”, his 1994 album from the career phase known as Era I, which spanned from 1993 to 1999. All of the Era I albums were written entirely on synthesizers and were described by Mortiis as “dark dungeon music.” From rumbling atmospheric drones to sickly, filtered synthesizers, Mortiis created a spellbinding set for long-time fans and newcomers alike. The weird dark retro vibe of Highland Park’s The Lodge was the perfect environment for a show which brought an eclectic crowd for a lineup that was refreshingly far from the beaten path.