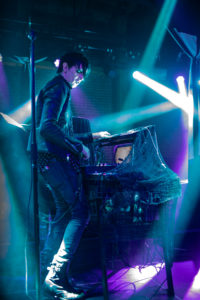 Everybody’s favorite Kult has done it again with their latest release, In The House Of Strange Affairs, an appropriately sleazy and campy chapter in the noir-meets-psychedelic-industrial-disco chronicles of My Life With The Thrill Kill Kult. They were joined on this tour with the multi-talented Curse Mackey, who has just released his first solo album, Instant Exorcism. A Pigface veteran who stormed the industrial scene in the 90s with his dark and gritty band Evil Mothers and his numerous collaborations with My Life With The Thrill Kill Kult, his solo work effortlessly fuses his past influences and ideas into one dark and truly beautiful experience. Taking the stage, you would have never guessed that something coming from one man with a few synths, could sound so huge. Crouching towards us with massive stage presence equal parts Peter Murphy and Iggy Pop, Curse Mackey cast a spell on the crowd. The moody “Submerge” and the synth-tastic stomper “O’Blasphemy” transported us somewhere else…primal, raw, and riveting. When My Life With The Thrill Kill Kult took the stage, the goosebumps had not yet worn off. 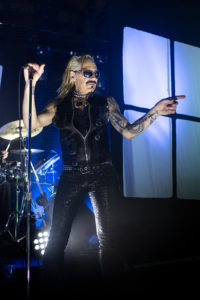 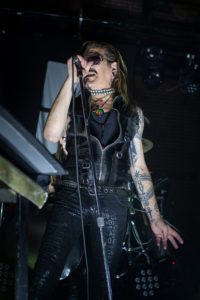 As the glamorous Groovie Mann prowled the stage and shook his hips, crooning his distinctive slam-poet style lyrics, the band kicked off their set with “Strange Affairs” from the new album. Against a dimly lit backdrop of mysterious-looking windows which looked straight out of a murder mystery book cover, the mood was set for a memorable ride (on the mindway!) though darkness, decadence, and-always-dancing. Old school Wax Trax favorites such as “Do You Fear For Your Child” and the legendary groove of “A Daisy Chain 4 Satan” were in the mix, held down by the fierce and fabulous bassist Mimi Star, as well as Hit & Run Holiday favorite “Glamour Is A Rocky Road” and A Crime For All Seasons lovably cheesy “Lucifer’s Flowers.” Whether you’ve seen them dozens of times or this was your first time (we always remember our first time!), they played every song as if it were brand new, with a showmanship that swept us all off our feet and was just plain fun. 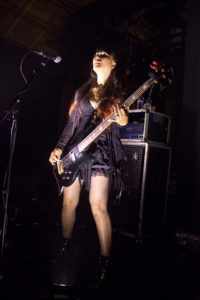 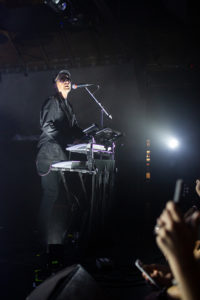 In fact, the energy was so intense that the band even had to pause the set to get drummer Justin Bennett’s kit back on the platform: “We vibrated the fucking drums right off the stage!” Groovie exclaimed. Other tracks from the new album included the catchy “Forbidden Saints” and the club-friendly “Year of the Klown” with its bubbly synths courtesy of brilliant keyboardist/other half Buzz McCoy, its infectious chorus rounded out nicely by Thrill Kill Kult’s tight and mighty rhythm section. The encore included another Confessions Of A Knife throwback “Burning Dirt,” (with lyrics you might recognize from the recently released soundtrack to Industrial Accident, the Wax Trax documentary) club kid singalong “The Days of Swine and Roses”, and the hard-hitting classic “After The Flesh” from The Crow soundtrack. From the old school hits to the new school delights, a good time was had by all. 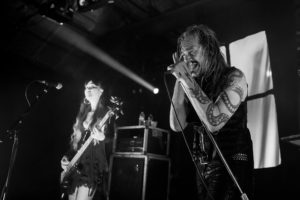 https://mylifewiththethrillkillkult.com My Life With The Thrill Kill Kult website

https://mylifewiththethrillkillkult.com/store# purchase the new album In The House Of Strange Affairs