First-generation punk band Penetration return to touring with a set of UK tour dates for 2019, starting this June 21st with a London show at the Royal Albert Hall alongside Buzzcocks and Skids. This special show celebrates the life of Buzzcocks frontman Pete Shelley, who sadly passed away in December 2018. Penetration’s singer Pauline Murray is also one of several guest vocalists who will perform with Buzzcocks that evening. 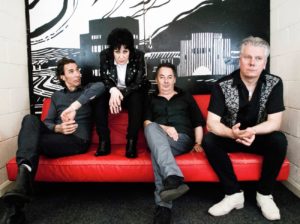 The two bands go back quite far, as Murray had this to say about Buzzcocks at her recent appearance at the Vive le Rock Awards in London, where she presented Buzzcocks guitarist Steve Diggle with the Rock in Peace honour: “I first saw Buzzcocks as an 18 year old at the screen On The Green in 1976. Punk inspired young people to explore talents they didn’t know they had and Pete Shelley wrote love songs with a twist, simple yet profound. I wish Pete was here tonight to know how much he was appreciated for his lifelong dedication to music and providing the soundtrack to the lives of a generation. It’s only when someone leaves us that we notice how their lack of presence can change everything.”

The two bands also toured together in 1978 and Penetration covered Buzzcocks’ classic single “I Don’t Mind” for the sessions that later resulted in their 2015 comeback “Resolution”. Buzzcocks drummer John Maher, who played on the original version of the song, was part of Penetration’s lineup at the time. A live video for the song was shot during a performance at The Playhouse in Whitley Bay, you can watch it here.

The tour also includes a set at Blackpool’s Rebellion Festival, which will also have an appearance by Pauline Murray & the Invisible Girls, which features both Murray and Penetration’s bassist Robert Blamire. They will play songs from their self-titled 1980 album.

Murray has also been working on a solo album whose release date is yet to be confirmed.

Below are Penetration’s tour dates: