The dimly lit, densely fogged fervor at the packed-to-the-gills Echoplex in Echo Park, was the perfect environment for the stark and gloomy beats of Turkish goth rockers She Past Away. This particular show was the last date of a tour which marked their US appearance. The energy was running high and the line for the merch table was halfway across the room well into the night; openers Twin Tribes were another highly anticipated act. 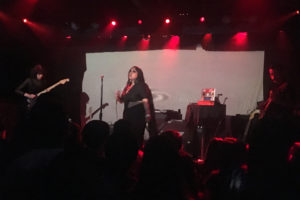 The night started with dark post-punkers Aurat, featuring Pakistani-American vocalist Azeka Kamal’s ethereal wail against synths and electronic percussion by Gil Talbot. Guitarist Natasha Martin (of Katatonic) jumped in on guitar for a spirited cover of The Stooges’ classic “I Wanna Be Your Dog.” Their high-energy set was a perfect 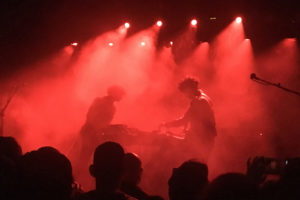 segue into the slick, retro vibe of dark synthwave duo Twin Tribes. Packing a lot of punch for just two people, their set included the popular single “Shadows” which was featured recently on Metropolis Records’ Dark Nouveau compilation, as well as their first single “Still in Still” and other newer songs from their latest release, Shadows. “The Path To Antares” was particularly atmospheric, showcasing their synth-heavy sound beautifully. 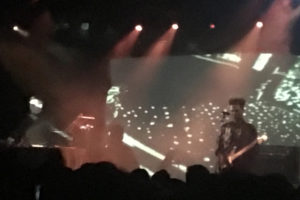 When She Past Away started their set with “Ritual” from their 2012 release Belirdi Gece, vocalist Volkan Caner lurked in the shadows and keyboardist Doruk Ozturkcan could barely be seen through the swirling fog and hectic strobes (let alone the sizable crowd!). While their stage presence initially seemed slightly subdued compared to the opening bands, their sound made up for it and enhanced the atmosphere of the night. The new songs off their latest release, Disko Anksiyete, were tight and polished, especially the title track and the hypnotic, Joy Division-esque “Durdu Dunya.” They also had a track on Dark Nouveau called “Asimalasyon,” which they pulled off perfectly with Caner’s moody guitars against his staccato vocals and stark synths.

It’s a testament to the popularity of the newer goth sound that this show sold out and was a talking point for months beforehand on the event Facebook page. For all who might lament that the goth scene is dead (undead, undead, undead?), the mob of black-clad baby bats and elders alike was a testament to the fact that it’s very much alive and well.

https://shepastawayofficial.bandcamp.com She Past Away Bandcamp page