“This isn’t a love song,” quipped Christopher Hall shortly before tearing into their breakthrough single “Violent Mood Swings” off 1994’s Ungod, draped in his trademark distressed black sweater and leaning over the mic into a delighted crowd. And yet, we were swept off our feet anyway.

Also of note was the opening band, LA’s own INVA//ID, who released their debut last year, Masochism In D Minor. Do not be fooled by lead singer Chris Rivera’s bleached-blonde pretty-boy looks and the approachable easygoing nature of his bandmates Krz Souls and Brendin Ross who lend their musical chops to the chaos; that’s just a front for their distortion-drenched brutality. If you like 90s and early 00s industrial and coldwave, the album is a must-have. From the stomp-tastic “Hangman” to “Worm” which evokes Tactical Neural Implant-era Front Line Assembly, they set the stage perfectly for the rest of the night. 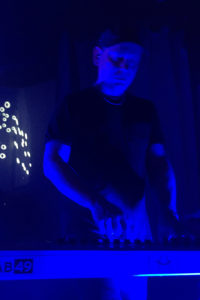 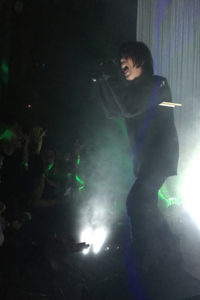 Stabbing Westward started with the new single, “Cold,” which featured Christopher Hall on trumpet, building momentum into a dark and heavy dance beat. With Hall’s trademark whisper-to-a-scream vocals cutting through relentlessly and keyboardist Walter Flakus holding down hauntingly beautiful synths, Stabbing Westward was back. And yet, the show had a fresh energy even when they played their older songs like “Save Yourself” and “What Do I Have To Do?”; it hardly felt like a nostalgia trip at all and more like we all just wandered into this awesome bar in LA to see this cool new industrial band.

Even the minor technical issues were cause for playful banter and experimentation, which lent a memorable intimacy to the show. As they launched into more familiar ground with “Falls Apart” and “Sometimes It Hurts,” the crowd sang along, swept up in 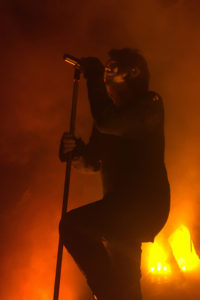 Stabbing Westward’s signature blend of light and dark. They also covered the Garbage song “#1 Crush”, turning it into a gritty, sultry head trip. (But not a love song!) They finished us off with a heartfelt, sparse rendition of “Waking Up Beside You” off 1998’s Darkest Days that hit us right in the feels, and then-of course- the unforgettable “Shame” off their 1996 album Wither Blister Burn +Peel with its scream-along chorus.

Many of Stabbing Westward’s old favorites and their much-anticipated new EP center around themes of heartbreak and loss, displaying an emotional vulnerability that you don’t hear often in this genre. However, there’s an undercurrent of strength that wins over even the toughest rivethead. Whether you loved them as a teenager in the 90s or if you’re just discovering them now and wondering why Christopher Hall doesn’t seem to age, either way, you were definitely in the right place if you managed to catch Stabbing Westward’s EP release show at Bar Sinister in LA.