After the success of ‘The Blue Hour’ and an incredible European tour earlier this year, Suede will tour the UK in April 2019. 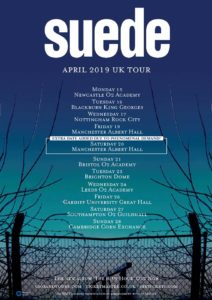 Due to phenomenal demand a second Manchester show for April’s UK tour has been added.

Tickets are on sale now: http://gigst.rs/Suede