On Saturday 29 August 2020 SUPERGRASS will play a huge outdoor reunion show at Windsor Racecourse. This unique event will allow audiences to enjoy an entire day of racing at one of the UK’s most prestigious arenas, with the added bonus of a full set by Supergrass late into the evening. 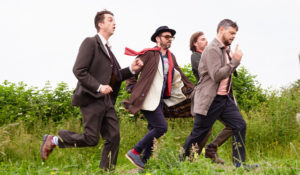 Releasing their debut single ‘Caught By The Fuzz’ in 1995, the band instantly scored a Single Of The Week in flagship titles NME and Melody Maker; but this was just the tip of the iceberg. One of the most popular and enduring bands to emerge in the last 25 years, Supergrass would go on to score an unbroken run of five Top 10 albums, among them three platinum sellers generating millions of worldwide sales spawning ten Top 20 singles. Earning a Mercury-nominated debut album ‘I Should Coco’, the band would also go on to win awards at the prestigious Brits and Ivor Novellos. Releasing their sixth and last studio album ‘Diamond Hoo Ha’ in 2008, Supergrass toured the record, before announcing they would be parting ways with a short farewell tour in 2010. In 2020, the band are now preparing for some of the biggest shows of their career to date, including an unmissable 17000+ capacity fixture at Windsor Racecourse this Summer.

Tickets go on general sale this Friday 17 January at 10.00AM.

Tickets are priced at: