Enigmatic Canadian’s The Birthday Massacre recently toured the UK with their 8 date Under Your Spell tour. They covered most of the UK including shows in London, Whitby Goth Weekend and, more unusually, Sub89 in the town of Reading. The supporting acts of the evening were Lesbian Bed Death and Pythia.

Symphonic metallers Pythia kicked off the show. As expected for a band who have been in existence for a decade, they have a very professional stage show. Their sound is less operatic than one might expect, which can work in their favour in a world swamped with Nightwish wannabes, and went down well with the crowd on the night.

Main tour support, Stoke on Trent‘s Lesbian Bed Death, are an act I have been aware of since the original release of ‘Goth Girls Are Easy’ in 2006. The subject matter of the song caught the attention of the UK goth scene, and probably helped them book a few more gigs on the back of it. The original version with male vocalist, was later re-recorded with female vocals, which is what they stick to 100% these days. Since the release of debut album ‘I Use My Powers For Evil’, they material has focused on more serious subject matter, they have released a number of very slick videos, and left the goth association behind. More rock than metal in sound they made a nice transition in sound from the opener, to the headliner. 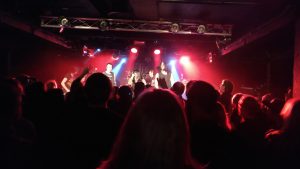 The Birthday Massacre took to the stage, the day after Halloween, to probably one of the smallest audiences they have played in a while. It’s not that Reading doesn’t have good venues, it’s just that the bands don’t come/get booked. Tonight’s venue, Sub 89 has a calendar filled with cover bands. Very few high profile bands play in Reading (aside from the famous annual festival), so music fans are used to traveling to London or other nearby cities to get their live music fix. With Whitby and London already covered on the tour, locals who travel already had an opportunity to catch the band recently.

Based on smaller size of the gig, I initially assumed that the toned down look sported by the boys in TBM of band tees and stubble, was a reflection of a band taking it easy, but a quick check of photos from other shows on the tour revealed that this was the look of the tour. Frontwoman Chibi sticking to the more familiar TBM image in a sparkly dress. This wasn’t what I had come to expect from them but it possibly made me focus more on the music, and was interesting to see from an image driven band.

Initially the show seemed a little off to me (I have seen them live 4+ times before). The lighting was a little too red, and the sound too raw. I associate them with purple and blue, and always forget how much grittier they sound live. The crowd huddled around the stage, to see the band perform their usual professionalism and vigour. Chilbi told the audience that she thanked every single person for attending (which mean a lot more with the sparse numbers). They could have been playing the gig to 100 times more people and it would have been just the same. Once I had warmed into it I was captivated by their trademark switching between being as metal as a metal thing, to sweet poppy darkwave within the same song. It’s this genre spanning which gives them such wide appeal, and lead to this extensive tour. The set was crammed with hits including ‘Red Star’ ‘Kill the Lights, ‘Lovers End’ and ‘Video Kid’ and there was also a big focus on the excellent new album “Under Your Spell”. Opened with “Counterpane” and included my personal favourite “Under Your Spell”. It was great to hear so much of the new material live and quite special to see such a great band in an intimate gig. I have seen them at large outdoor festivals, and they always sell out London shows, where I usually see them in the UK. As a fan rare smaller events are to be treasured, and the band and the team behind the event are to be commended putting on such a great show.