“There’s nothing like live rock n’ roll,” mused Ian Astbury to a rapt audience under the full moon at Greek Theatre last weekend; wise words indeed from a leading expert. The charismatic frontman of 80s goth rockers The Cult was in top form for a perfect night of smash hit after deep 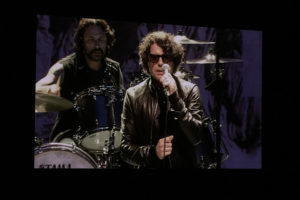 cut, kicking things off with “Sun King” and “New York City” off their 1989 release Sonic Temple. Astbury strutted around the stage amidst fog and star-like strobe lights, channelling equal parts Robert Plant and Jim Morrison as he belted out  “Sweet Soul Sister,” with John Tempesta’s drums thundering and Billy Duffy’s guitar wailing the signature opening riff. The acoustics of the theatre were made for a band like this; every note hung in the air just right and even the slower, bluesy ballad “Edie,” (also from Sonic Temple) left a massive impression. In addition to the crowd favorites like “She Sells Sanctuary” and 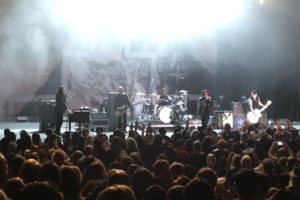 “Rain,” they graced us with newer material, like 2001’s “American Gothic,” a sludgy, moody number off the psychedelic-meets-gothic Beyond Good And Evil. “Sanctuary” in particular felt fresh and new again despite being a classic which turns 35 next year. The last song of their encore was the tight and furious “Love Removal Machine”, with unwavering energy and swagger. The Cult has always stood out to me as one of those dark alternative bands you can bring home to mom and dad, in that they successfully bridge many divides between good old rock n’ roll, metal, psychedelic rock that would fit right in to the 1960s Haight-Ashbury scene, eyeliner-and-fishnet gothic rock, and brooding post-punk.

They were joined on this tour by hip-hop-meets-goth trio Prayers, ethereal avant garde Zola Jesus, and up-and-comer postpunk duo VOWWS. 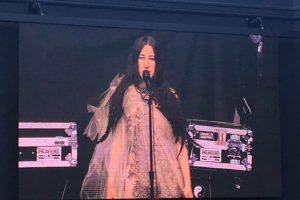 Zola Jesus was an intriguing interlude and I found myself wanting to see them in a small club, as some of their artsier moments seemed to get lost in a large arena; still, they complemented the rest of the lineup with front woman Nika Danilova swirling and singing in the foggy evening amidst a blend of noisy synths, operatic vocals, and processed violins. Prayers was another genre blend that as far as I know, has not been done; the best I can describe it is, imagine if a more serious version of the Beastie Boys started listening to Bauhaus and worshipping Satan. Although, to clarify, “I don’t worship the devil; the devil worships me!” proclaimed fishnet-wearing frontman Leafar Seyer, whose background of 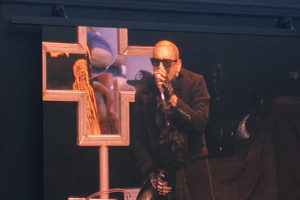 gang life and struggle provided the inspiration for their self-proclaimed “cholo-goth” sound. If you ever wanted to hear 808 hand claps and the amen break in the middle of a song that could have otherwise come from the floors of the Bat Cave circa 1986 or so, now is your chance. Knob-tweaking synth master Dave Parley provided their unique beats, with Seyer’s wife Kat Von D joining them for “Black Leather.” Their set seemed an easy divider between the elder goths who were there only for The Cult and the newer blood; even so, they were actually discovered by Ian Astbury himself…so they’re worth checking out. In addition to Prayers, Leafar Seyer is also a visual artist and writer, and founded a collective called Diamond Dogs, made up of retired gang members who are interested in visual art and music as a way to stay off the streets. 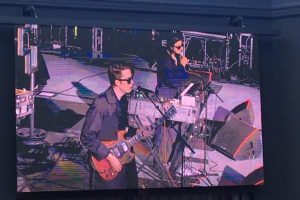 And to start this magical night off, we had the LA electronic duo VOWWS, whose short but sweet set included the title track off their 2015 debut The Great Sun as well as “Stranger” (featuring a particularly beautiful vocal performance by Rizz, the hauntingly whimsical “Esseff” off their followup Under The World, and “Losing Myself In You,” a dreamy synth pop number which originally featured Gary Numan on vocals for the album version. While you could definitely hear the Gary Numan influence as well as Bauhaus, The Cure, and some similarities to early Dead Can Dance, VOWWS has a presence that’s all their own. It was the perfect start to a lineup which really did feel like a spiritual journey of sorts.