On 26 March I had the opportunity to see The Stranglers live for the second time in my life. I chose to see them in Guildford again, the town where it all started for this legendary British punk rock band. I was rather impressed by the performance of the scene’s veterans a few years ago and I wondered if they would exceed my expectations this time. 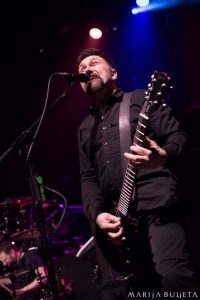 The supporting act, to the utmost joy of the audience, was Therapy?, who are another respectable group of alternative rock lads. If you were a fan of the 90s alternative music, you would most certainly know their opus. The trio performed in front of the rather filled venue and I instantly spotted the diehard fans in the front few rows. To my surprise they started with the harsh and raw cover of Joy Division’s “Isolation” from the Troublegum album. The second song was the one that used to be played a lot when I was still just a high school teen; “Die Laughing”. It was such a flashback to hear it again, and this time live. Although 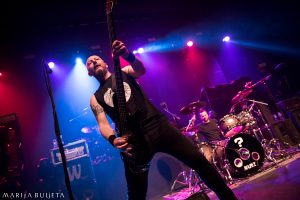 they also played other materials, they focused on Troublegum; we heard “Turn” and “Screamager”, as well as a few others. Before they started playing “Teethgrinder”, Andy Cairns made a funny remark about the times when everyone used drugs which caused people to grind their teeth! The performance was as energetic as the music; Andy is not only the master of the guitar riffs and his powerful voice, but also of his facial expressions. He was expressing what he was feeling, and you could clearly see the emotions in his eyes. The bassist Michael, however, had the best moves; he was playing the bass with such energy that it was a real pleasure to catch him on photos. Neil’s drums playing was as energetic as we would have expected from their repertoire. It was really amazing to hear so much power coming from only three guys; I must congratulate them on such an amazing performance. After 13 songs and 45 minutes the band called it a day.

The venue was now almost fully packed. The Stranglers appeared at 15 to 9. “Curfew” from Black and White was the first song they played. I was really

hoping to hear the older material, since I am a big fan of their 70s and 80s albums. And, as if they read my mind, they played “(Get A) Grip (On Yourself)” from Rattus Norvegicus right after. The crowd was ecstatic and it seemed that the band was ecstatic too. I was amazed by the stage lightning and video projections which really made the show a spectacle and added to the frenzied atmosphere. What was in front of us on the stage were four exceptional musicians who were giving all they had to the audience. “15 Steps” from their 2012 Giants album was the next one. However, there are undeniably hits that everyone wanted to hear and to sing along to, and 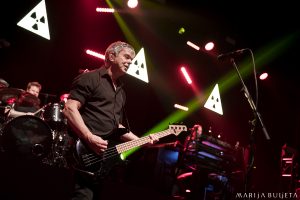 “Bear Cage” was definitely one of them; it sent shivers down my spine and I am sure I am not speaking only for myself. The band sounded amazing and they looked very cheerful; while I was taking pics, I could clearly see that they were in an exceptionally good mood. Jean-Jacques was smiling at the audience and the cameras, and he proved he could still jump really high. If the previous song wasn’t enough to stir things up, “Nuclear Device” surely didn’t leave anyone cold-hearted, nor did “Peaches”! After the emotional “Relentless” from the 2006 Suite XVI album, the show suddenly became even more emotional; Jean-Jacques sang “Don’t Bring Harry”, and then followed “Golden Brown”. The Stranglers always knew how to hit me in my weak spots and “Don’t Bring Harry” is probably one of the weakest; I almost cried. I was still in the photo pit looking at Jean-Jacques, completely hypnotized and mesmerized, and this timeless song has never sounded better! This slow dancer was my absolute highlight of the 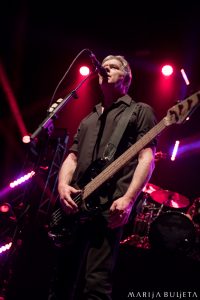 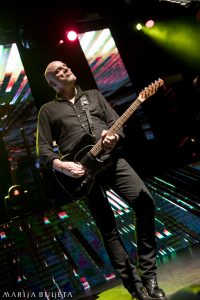 show. Even “Always The Sun” couldn’t beat it! Although I have always been a huge fan of Hugh Cornwell’s voice, Baz has been doing a really amazing job as the vocalist and I could hear that especially during the performance of “Golden Brown” and “Always The Sun”. Just when I thought the show couldn’t get any better, they played “Walk On By”, “Something Better Change” and “Duchess”. They closed the show with “Tank”. However, we knew that was not all for the night. The band returned to the stage rather quickly. Baz announced the song which Jean-Jacques wrote in his parent’s bedroom. He also added that it was the best gig they had done in Guildford. Although I’ve seen only two gigs so far, I would agree that this one was absolutely fantastic. The first guitar and synth chords were already audible and we could recognize “Go Buddy Go”; the venue turned into a disco! What came next was a bit of surprise; Jean-Jacques made an unexpected improvisation on his bass guitar and transformed the vibrating, almost unbearable to listen to sound into “No More Heroes” introduction. I don’t think I can describe the 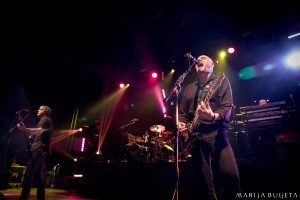 atmosphere at that moment. We all knew it would be the last song and no one wanted the show to end. It was so touching to hear The Stranglers’ song that was among everyone’s favourites as the last. The band came together to the stage and said goodbye to the crowd; I saw the drum sticks, guitar pick and towel flying from the stage and envied whoever was lucky to catch the great memorabilia from this amazing show. Mine are the pictures!