Whether you dug through the crates or slam-danced in the pit at a RevCo show, chances are if you lived in Chicago in the 80s and early 90s, you set foot in the legendary Wax Trax! store. Founded first as a record store in 1975 and then established as a label in 1980 by the industrial scene’s favorite power couple Jim Nash and Dannie Flesher, the Wax Trax store and label created a seismic ripple which also touched the lives of the punks, the New Wave kids, and of course, the LGBQ community. 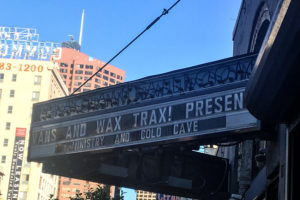 With a soundtrack featuring rarities and unreleased tracks from RevCo, Ministry, Front 242, KMFDM, and Chris Connelly, the film takes us on the trip of a lifetime from Arkansas to Denver, Colorado, to Chicago where it all happened. With moving and funny stories from the Nash family and their friends, Industrial Accident strikes a perfect balance between capturing the music, and celebrating the love between Jim and Dannie and the entire Wax Trax family. It’s as much an education about the music business, as it is a heartfelt and hilarious tale which blossomed from a Kickstarter, to a festival success sponsored by Vans with a soundtrack  that has flown off the shelves and was a huge hit on Record Store Day. As documentary films go, it brought its audience to tears and laughter in equal measure and is a must-see for any of the punks and freaks who have never fit in elsewhere. The Q&A panel included Julia Nash, Frankie Nardiello, Marston Daley, Paul Barker, and Wax Trax label staff member Larry Crandus. There was lively discussion about the making of the film (which started in 2010 and then was scrapped due to production issues and was re-shot entirely in 2016), the promising future of the industrial scene, and the induction into the Wax Trax family of skateboarding’s favorite shoemakers, Vans. During the Q&A, as a testament to the fact that Wax Trax lives on, Julia Nash mentioned current and upcoming projects of Wax Trax alumni, including Lead Into Gold’s album which came out last year (The Sun Behind The Sun) in conjunction with their Cold Waves appearance, the upcoming My Life With The Thrill Kill Kult tour and their new album (In The House Of Strange Affairs), and of course Ministry’s latest (Amerikkkant) and multiple tours over the past couple of years.

It was only right to have Uncle Al at the helm of the wayback machine for an intense and cathartic old school Ministry set, with  Cold Cave to open the show. Cold Cave set the stage perfectly with their blend of lush synthpop and danceable darkwave reminiscent of goth grandfathers The Sisters Of Mercy or The Mission UK. When Ministry hit the stage, the mosh pit was fierce but full of camaraderie, with a definite feel of nostalgia in the air, as they tore into old school thrashers like “Jesus Built 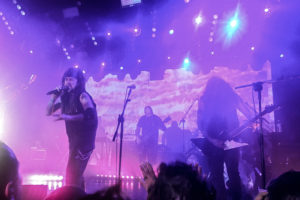 My Hotrod,” “N.W.O.,” “Stigmata,” and then brought us, sweat-soaked and reeling from the adrenaline, “into the hot tub time machine!” for classics “The Land Of Rape And Honey” (which recently saw its 25th anniversary) and a catchy acoustic rendition of “Everyday is Halloween,” with audience participation on the chorus. The energy of the band was contagious and Uncle Al was all proud smiles, clearly having a blast. Last on the setlist was the hypnotic RevCo track “No Devotion,” followed by the 1000 Homo DJs take on the Black Sabbath stomper “Supernaut,” which had everybody’s fists pumping in unison.

Industrial Accident is quite possibly the greatest love story ever told, and clearly the spirit and works of Wax Trax live on in a big way. For those lucky enough to witness it, during an unforgettable evening this past Tuesday, this was our house…and our house music!