The LA “death-pop” duo VOWWS will embark on an extensive European tour throughout May and June 2019. This is their first European tour which will offer fans a chance to see the band in areas they’ve never performed before, including the WGT festival in Leipzig, Germany. The tour starts in Belgium on 15th May and it will include shows in France, Germany, UK and more. 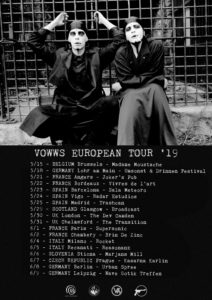 31 May – Chelmsford, UK – The Transition