On 30 May, The Dev Camden hosted one of the most exciting new acts we could’ve possibly wished to see in London. VOWWS embarked on their first European tour in May, starting said tour in Belgium on 15 May and ending with their performance at WGT Festival in Leipzig on 9 June. 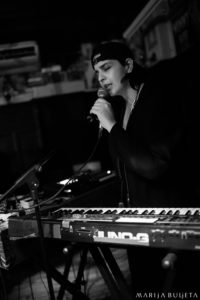 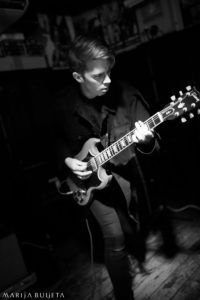 This fairly young band from LA caught my attention a few years ago, after hearing their single “Losing Myself In You” which featured Gary Numan. After listening to their debut album The Great Sun and their second album Under The World, I was convinced they simply had to become the next best thing. Rizz and Matt are fully devoted to their peculiar music style and artistic inspiration, which goes beyond only sound; they are not afraid to experiment and incorporate strong visual aesthetics into their art. You can find elements of different influences in their music, and not all of them have musical background, which makes them even more complex and intriguing. I’ve wanted to see them live and meet them in person for a long time; I got exactly that and even more in London. Their live performance brought me to tears at moments, and it was a surreal experience to finally see them doing what they do best: playing music.

The Dev was quite full by the time they got on stage. I knew they would play a 45-minute-long set and I was rather curious about the set list. They opened with “The Season” from The Great Sun and right from the start I could see they really reached the audience. Rizz and Matt were well rehearsed and passionate on stage, and the way they complemented each other showed off the great connection between them. The next song was a slower one, “Waiting For Me”. Afterwards, they decided to make everyone dance to their next song, “The Great Sun”! That song is still one of my favourite VOWWS songs; it’s the kind of song you can’t get tired of. I used to listen to it on repeat for days while I was contemplating the

bright future of this band. I always felt connected to their sound, words, and visual style, and I thought the video for the song was quite simple yet made such an impact. The best things are usually the simplest, and if you can pull that off, you really have talent.

“Esseff” is probably one of my favourite songs from Under The World, and they played it next – I couldn’t believe my luck! That song is a proper dance floor track, just don’t expect a poppy tune. “Inside Out” from the same album was played next. I was especially happy to hear “Symbol System” from their debut EP. It is really difficult to choose favourite songs; VOWWS take you on another journey with each song, and that’s exactly how I feel about “Stranger”, the song they played afterwards. A journey to another time and another place, somewhere I’ve never been, and yet the place seems so familiar to me. Their music really is a perfect soundtrack to my mind and sometimes I like to play them late at night, when you can hear yourself better; that’s a good place to go, together with VOWWS. They played “You Never Knew” and “Councillor” next. “Councillor” is one of the slower magical songs that I was hoping to hear, and they obviously read my mind. Of course they had to play “Losing Myself In 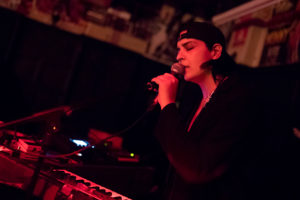 You”, and that one got everyone singing! We missed Gary, but hearing it sang by Rizz and Matt was a welcome surprise, I loved it all the same!

They chose “Against The Gates” to close the set and I just thought it was another magical moment of the evening, an evening that had to end too soon. My heart was full and it was really difficult to say goodbye to them. I had a chat with Rizz and Matt after the show and I must admit, that was one of the friendliest and most emotional chats I have ever had with a band. There is a reason why some artists make their art a masterpiece, and I think I found the answer to that puzzle after hearing and seeing VOWWS live.

They promised to return to Europe soon, and I really hope they will get a proper stage and a bigger venue next time. I will never for a second stop believing that this band was meant to go places, because they already have a very special place in the hearts of their fans.