I was very eager to finally see A-ha, and as I have never seen them live before, I really had no clue about how this experience was going to look like, but my expectations were high.

At 15 minutes to 9 the lights at the London O2 arena went down and the blue light appeared on the stage; I was almost nervous to see Morten and the guys and hoped to hear some great music they had produced in some more than 30 years. 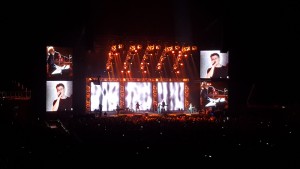 As soon as they have started, they went straight for one of their greatest hits “I’ve Been Losing You” giving something solid to the audience: the A-ha pleasure they came there for. From the first song it was clear they were going to give a superb performance as they were flawless indeed. The trio was supported by the drummer, the bass player, one more synth guy and a wonderful female backing vocal. But just as you can perform flawless on an instrument, the most sensitive of all instruments on a stage is a human voice, and Morten sounded wonderful; like a nightingale he always was! There was no difference from hearing a studio record as far as his voice was concerned.

The crowd did not have to wait long for another old hit of theirs, “Cry Wolf” and I am sure we all became very nostalgic at that moment. They had great visuals along with this song, as there were some wolf animations appearing on the video walls behind them. And if you had far seats, you could see the guys at the large video walls on each side of the stage; nicely done! 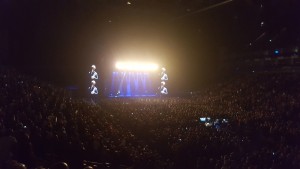 ” was the next one, and by that time, the crowd was already head over heels with A-ha! But as they said at the beginning, the evening would be a retrospective of their 30+ years long career, we could really expect a hit parade, as indeed it was; for the fourth one, they chose “Stay on These Roads”. They decided to play one more from Scoundrel Days album: “The Swing of Things”.

It took them a while to play a song from their last album, and they chose “Cast in Steel”. Even though I am not so thrilled with this one, hearing it live gave it a new dimension, so I got to the bottom of its emotional potential you can maybe not feel while listening at home. The great sequence after this one would surely be “Crying in the Rain” and they played it! I think no one could keep quiet, and I sang it all the way and really annoyed the closest person to me, I think! Next one was “Mother Nature Goes To Heaven” from Foot of the Mountain so we got to hear something more recent from them, and as they said it would be a retrospective of their 30 years, it surely was. If you have not been their true fan since their early days, this one would maybe skip your attention, but one more from Scoundrel Days was played: “We’re Looking for the Whales” and so far this album was the most present on the stage this night. The only song from Minor Earth Major Sky that was played was “Velvet” and I think that was their only song I truly don’t like. As Morten has gone from the stage for a break, Paul took the microphone this time and sang it. Magne, who was in fact the only contact with the audience, took the next one. He excused himself for not being such a brilliant vocalist asking for the support of the fans to sing “Lifelines”, a marvellous song that I would rather leave to the voice of Morten, so it really ruined it a bit for me. 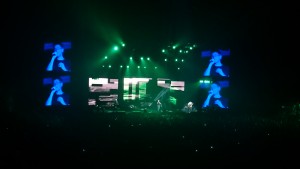 Maybe I should know who their backing vocal was, as it was one superb female voice and the lady sang a very nice female version of “Here I Stand and Face the Rain” that is one of my dearest songs from the Hunting High and Low album. Her performance gave a new life to the song, and it was a really nice surprise. I could not have imagined it being sang by anyone but Morten, but Morten just got himself a great competition here. After Morten’s re-appearing on the stage, the band played “Sycamore Leaves” the second one tonight from East of the Sun, West of the Moon. I was blessed with my favourite song from Cast in Steel as they played “She’s Humming a Tune” next and “Foot of the Mountain” after it, and at that time I really couldn’t believe how much more meaningful everything sounded when played live, even the songs I don’t usually like to listen at home. Morten’s voice was crystal clear throughout the whole evening and like years did nothing to that man; his voice and his looks were preserved. But the only thing that I regretted was Morten’s complete lack of communication with the audience, maybe a smile here and there, but Morten seemed distant and the only one who was doing the job you would expect from a lead singer was Magne, the keyboardist. 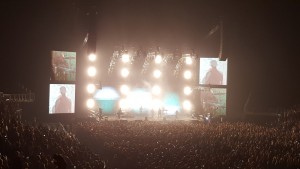 At the moment they started playing “Hunting High and Low” the whole arena got up on their feet and I have witnessed one of the most touching moments on a live show. This performance was so breath-taking, so emotional, so everything; it was really the highlight of the entire evening for me. The arena went wild, and Morten made the first connection with the audience, encouraging us to sing, stretching his microphone to us, and keeping us busy doing his job for some moments. And finally they played “Scoundrel Days”, one of my favourite A-ha songs, before they decided to retreat.

Of course they could not avoid the encore and one more treat was played: “The Sun Always Shines on TV”. We were somehow expecting “Take On Me” next, but instead we heard an acoustic version of “Under the Make Up” from Cast in Steel. I missed the great orchestral arrangements that I consider the greatest strength of the song, but it was nice to hear a bit different version and this was the second time this evening that Morten showed this much emotion while performing and I got an impression he is more at home with performing emotional ballads. As they could not leave the UK crowd without one gem, they of course had to, and really had to play “The Living Daylights”; at least you need to indulge the fans of both A-ha and James Bond when in the 007 country! 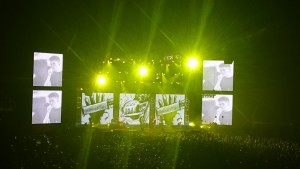 And the time to part with us sadly came too soon, there were so many songs that we would have still liked hearing and the crowd would simply not move after they retreated from the stage for the second time. And it was obvious they needed to come back for at least one more, and what else to give to their devoted fans, but the ultimate hit of theirs: “Take on Me”!